Maybe its a bit of kismet that Asmodee dropped Terraforming Mars ($8.99) onto iOS so close to one of the biggest board game weekends of the year in Pax Unplugged, or maybe it was calculated. Either way, it’s an exciting time to be a board game enthusiast! In 2016, FryxGames released the physical version of this masterpiece board game and since then it has risen as one of if not the most complete and well-rounded strategy games in recent history. With colorful card art and shiny tokens, it is a head turner every time you open the box up. Without the stunning physical components, you might wonder how the app holds up, but wonder not: We are about to embark on a trip to a cold red planet where things are heating up. Take a deep breath of that newly pressurized oxygen as we take the plunge into oceans of fun with Terraforming Mars. 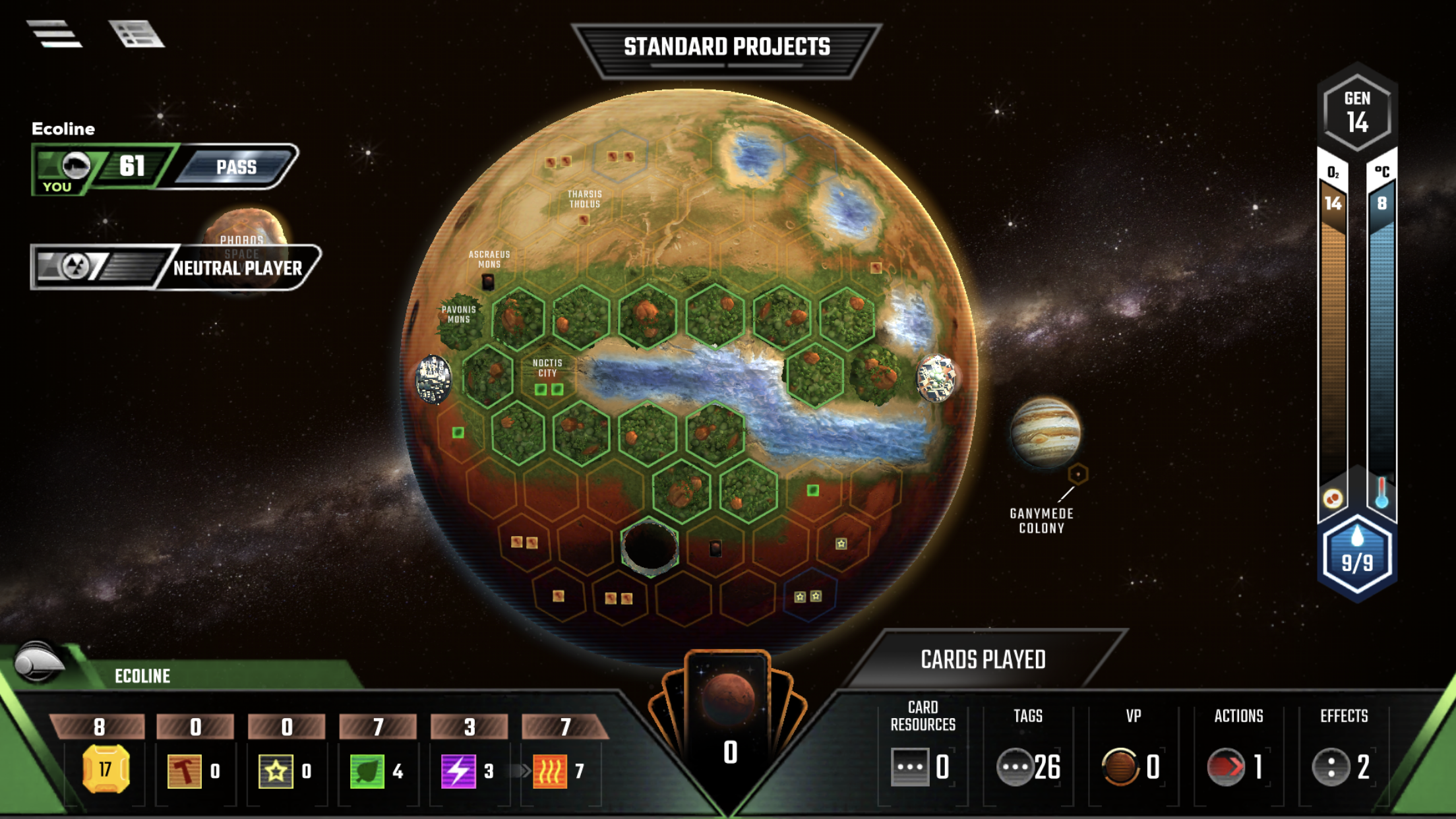 So what is the point of this game? The title suggests that terraforming, or making a planet livable, takes a big role in what we’re doing on the 4th rock from the sun. While it is true that the terraforming process is happening through the course of the game, your main goal is primarily to profit off of the process rather than ensure that it gets done. Like most modern strategy board games, there are a number of ways to gain this profit. A game is over when oxygen, temperature and ocean count all reach a specific threshold.

Thematically this makes sense because carbon based life forms in general need to breath, need water, and need to not freeze. Increasing any of these 3 measures of success increases your individual Terraform Rating. The game consists of basic actions and card actions that allow you to do a variety of things. In general the cards are usually more specific but more powerful and are a finite resource. You make money based off of how high your Terraform Rating is, as well as a few other factors. Each resource in the game can be acquired as a result of an action, or you can increase your own generation of those resources as a result of an action. You are building an engine with which to purchase various actions in the future. 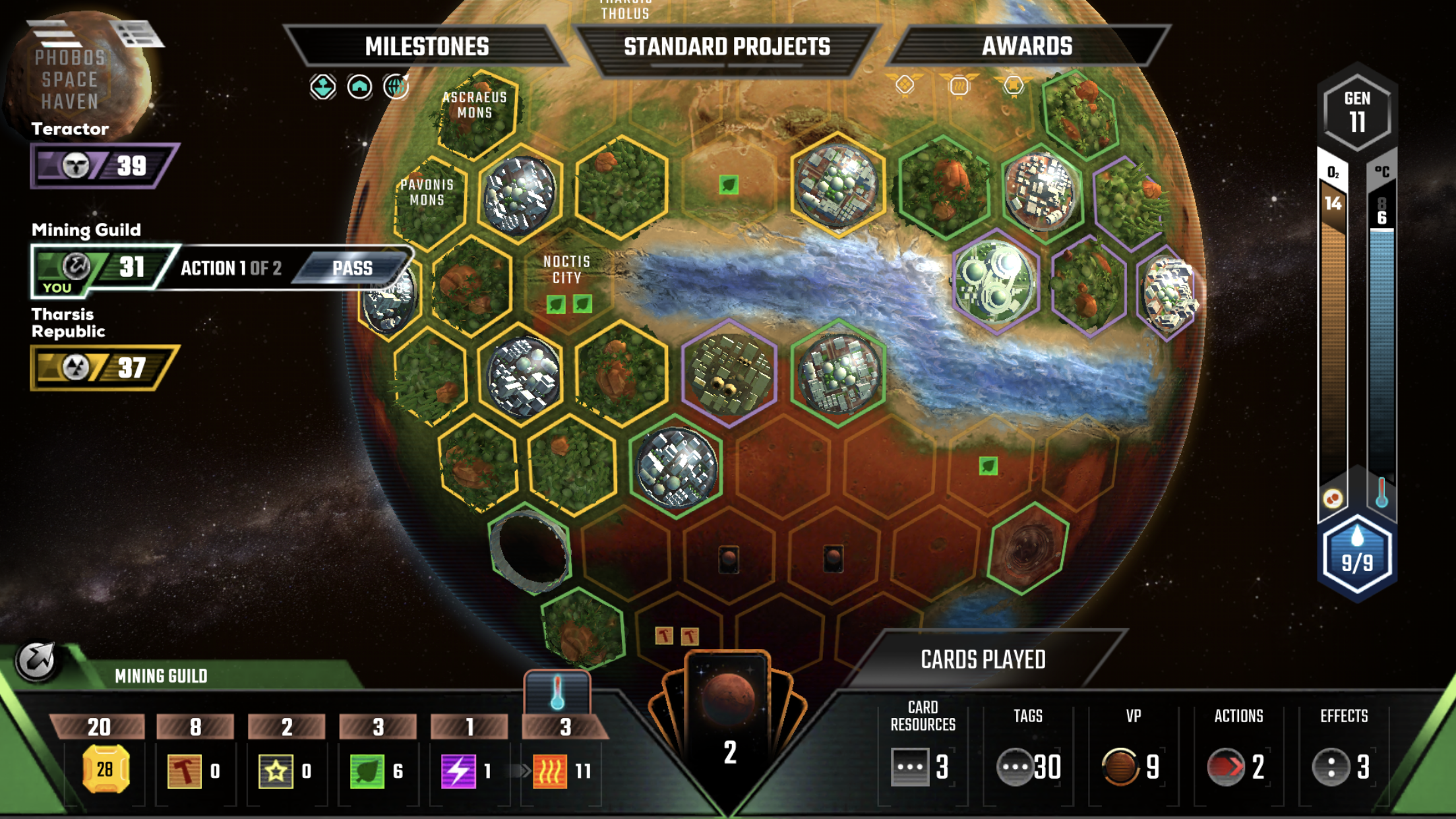 With some games you end up always having to accrue a certain resource to win points at the end of the game, or have the most of something for a bonus. Terraforming Mars actually has several goals like this that remain inactive until someone activates them. Only 3 participation type and 3 competition type goals can be active in any game so this further allows each game to be subtly different and allows people to mold the way scoring is handled at the end of the game. Suffice to say, if you are unfamiliar with the physical game, it is complex but amazingly well thought out and balanced.

The digital version of Terraforming Mars has big shoes to fill, but it has already put the right foot forward. A comprehensive tutorial, online play, and a very challenging solo mode all act as feathers in the cap of this very well thought out app. After going through the tutorial and beating the easy and medium AI, I puffed out my chest and said to myself, “HEH, I can take this solo mode no problem!” 3 hours later and about 6 play throughs and it turned out I was wrong. On my 7th play I did manage to beat it on the last turn but it is BRUTAL and a whole lot of fun. There are different corporations you can play as and I look forward to the challenge with all the other teams I did not play as.

Accessibility wise, there are sadly some buttons in the phone version that are super tiny, but they are not compacted or tough to tap and in general this game feels great to look at and listen to. The in-game music is reminiscent of the outerwordly FTL ($9.99) and, funny enough, I would rate both of those as two of the best futuristic/space themed apps that are out there. There are also a handful of special alternative rules that keep games fresh and interesting.

My big request and hope for Terraforming Mars is the addition of asynchronous multiplayer games. This is probably the only thing that I would say is “wrong” with the app. Sure the $9 price tag is bigger than most apps, but this is a fantastic way to enjoy a critically acclaimed game in the palm of your hand. Even without async, you aren’t going to regret picking up this gem and getting busy injecting an atmosphere, triggering volcanoes, or dumping millions of gallons of water on an alien landscape. The game is designed to give you options, and this app is a great option when considering how you want to play.

Chrome now warns you when your password has been stolen

December 10, 2019
Google is rolling out Chrome version 79 today, and it includes a number of password protection improvements. The biggest addition is that Chrome will...

CallMiner raises $75 million to derive insights from phone calls with...

Harry Potter RPG built entirely in Minecraft is years in the...