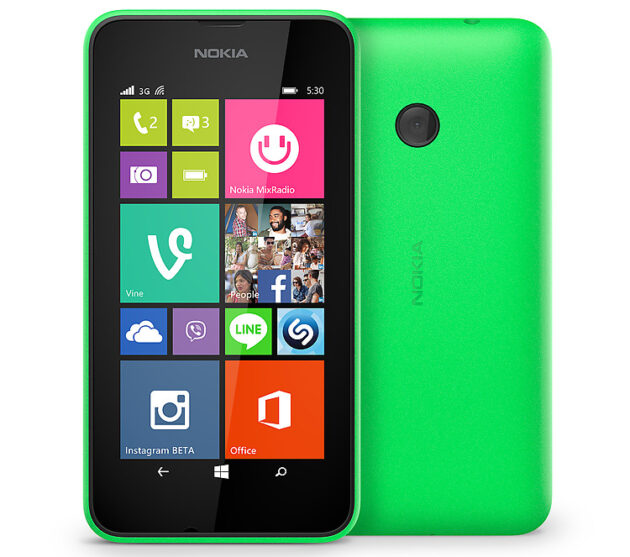 The Nokia Lumia 530, an entry-level device running Microsoft’s Windows Phone operating system that was released in 2014. The app tiles show how the tech industry has changed in the years since Microsoft acquired Nokia’s smartphone business. (Microsoft Photo)

It’s been more than five years since Microsoft’s $7 billion ill-fated acquisition of Nokia’s smartphone business, and now the companies are teaming up once again.

“Bringing together Microsoft’s expertise in intelligent cloud solutions and Nokia’s strength in building business and mission-critical networks will unlock new connectivity and automation scenarios,” Microsoft Azure Executive Vice President Jason Zander said in a statement. “We’re excited about the opportunities this will create for our joint customers across industries.”

Microsoft in 2014 completed the acquisition of Nokia’s smartphone business, a move the company hoped would provide a jolt to the Windows Phone division. The move proved to be an early challenge for CEO Satya Nadella, who dealt with the fallout of the acquisition that was first announced during Steve Ballmer’s tenure leading the company. Microsoft later retreated from the deal, shedding the smartphone business, shedding thousands of jobs and taking a $7.6 billion charge.

In 2016, Microsoft sold the Nokia smartphone business for $350 million to a subsidiary of Hon Hai/Foxconn Technology Group and HMD Global, led by former Nokia and Microsoft mobile executives. HMD has an exclusive license to use the Nokia brand on mobile phones and tablets.

Nokia’s primary focus now is on network equipment, software and services for communications providers and other enterprises. It has done extensive work to plan for 5G in recent years, and in 2018 it formed a $3.5 billion partnership with T-Mobile to speed up deployment of the next generation of wireless tech.

Google CEO Sundar Pichai: This is why AI must be regulated

Your Phone app may be bringing content transfer features soon

A look back at the PlayStation 4 and Xbox One era

December 31, 2019
Tech giant Baidu is slowly but surely progressing toward the launch of a commercial robot-taxi fleet in mainland China. This week, the company announced...

Eruption of Indonesian Volcano in 2018 Generated a Tsunami at Least...