The death of the headphone jack on your phone has unintended consequences. For travelers, one of the most annoying ones is that your very fancy Bluetooth headphones won’t work with the seatback entertainment systems on airplanes. If you are lucky — or clever — you have a pair of over-ear headphones that include a headphone jack, so using them is just a matter of bringing the appropriate cable.

But what if you want to use your AirPods, AirPods Pro, or other truly wireless headphones with the seatback system? For that you need — you guessed it — a dongle. And it’s worse than that because you need a dongle that you’ll have to keep charged.

My original goal here was to find (or even solder together) a clever cable that would convert the 3.5mm audio-out from the seatback into an audio-in to your phone’s Lightning or USB-C port, which you could then use an app to send the audio to your headphones. I maintain that this is a great idea because it means you don’t have to worry about pairing again. But the truth is that it’s a terrible idea. Such cables aren’t readily available, and the pairing bit isn’t that bad.

There are lots of different generically branded Bluetooth transmitters on Amazon, many of which look so similar that they’re surely coming from the same factory. I haven’t tried them all, but I have tried at least one of them as a kind of proxy for the rest. But if you’d prefer to spend a little bit more for something name-brand, the gold standard is the AirFly from Twelve South.

Option 1: use a Bluetooth adapter

I’ve tried three different Bluetooth adapters in an attempt to get audio from the seatback to my AirPods Pro: the original AirFly (now branded the “Classic”), the AirFly Pro, and a cheap and seemingly sketchy thing I found on Amazon from a company I have never heard of (Hagibis). All three, to my surprise, work equally well — assuming your flight isn’t too long, at least.

The basic setup is the same for all of them:

This all sounds awful. In practice, I was pleasantly surprised in each case when I was successfully able to pair my AirPods Pro right away — even midflight when there were dozens of other Bluetooth radios around, potentially screwing up the pairing process. It helps if you turn off your Bluetooth on your phone or nearby computer. That way, the headphones are less likely to just glom on to that connection instead of pairing to the new dongle. 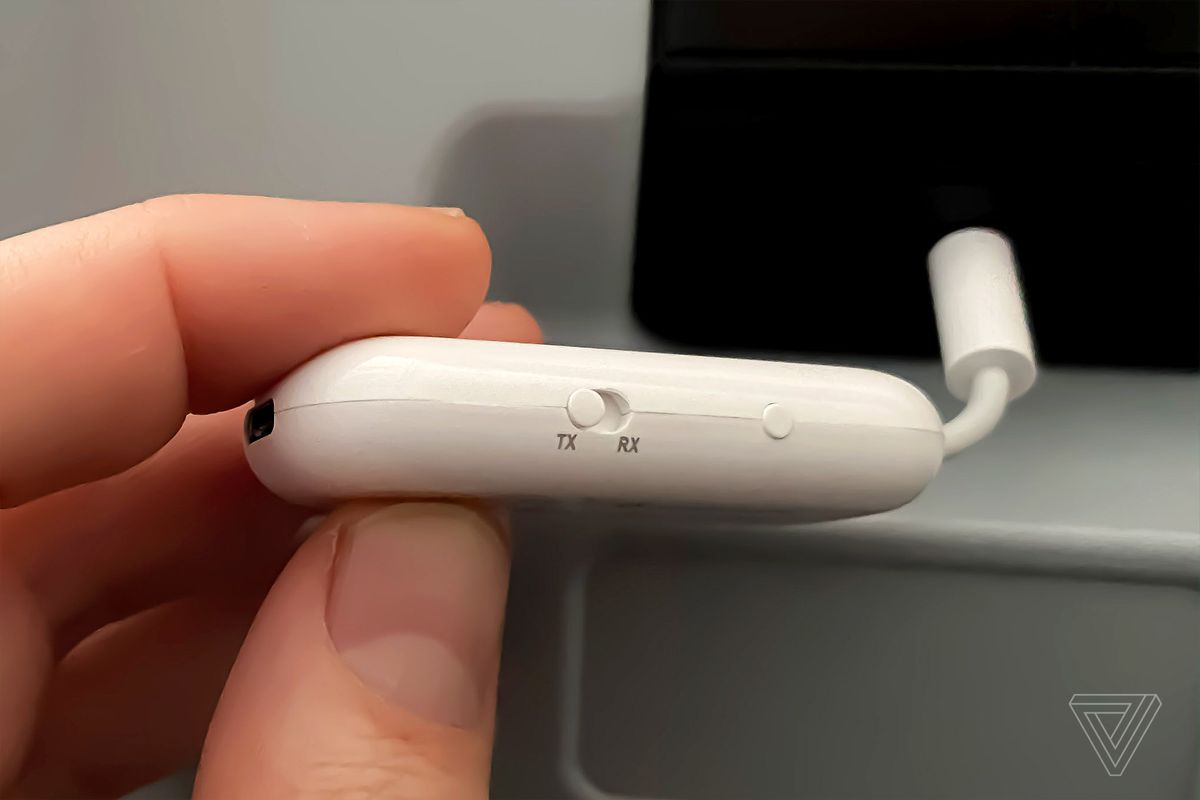 The AirFly Pro has an integrated 3.5mm cable, a switch for receiving and transmitting audio, and it charges over USB-C. Photo by Dieter Bohn / The Verge 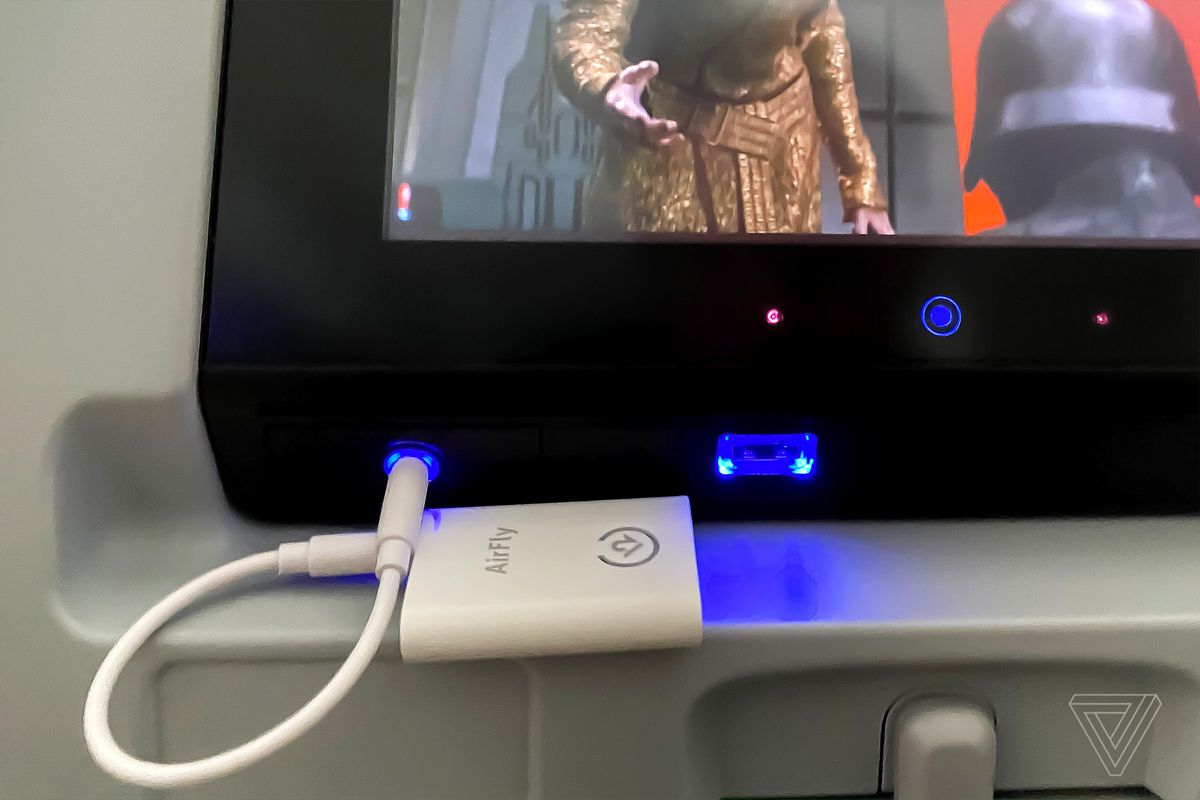 The AirFly Classic is clumsier to use than the Pro, but it costs less. Photo by Dieter Bohn / The Verge

There are, of course, gotchas. The Hagibis adapter I tried has a second button to switch between TX (transmit) and RX (receive) mode, which requires a second round of button-pressing light-blinking trial and error.

The next gotcha is volume: it was mysteriously lower using these dongles than it would have been just plugging in. Twelve South, the company that makes AirFly, has an FAQ in which it suggests that this an issue stemming from a recent firmware update for the AirPods. I had to set the airplane seat system to max, and it was loud enough for me but just barely. 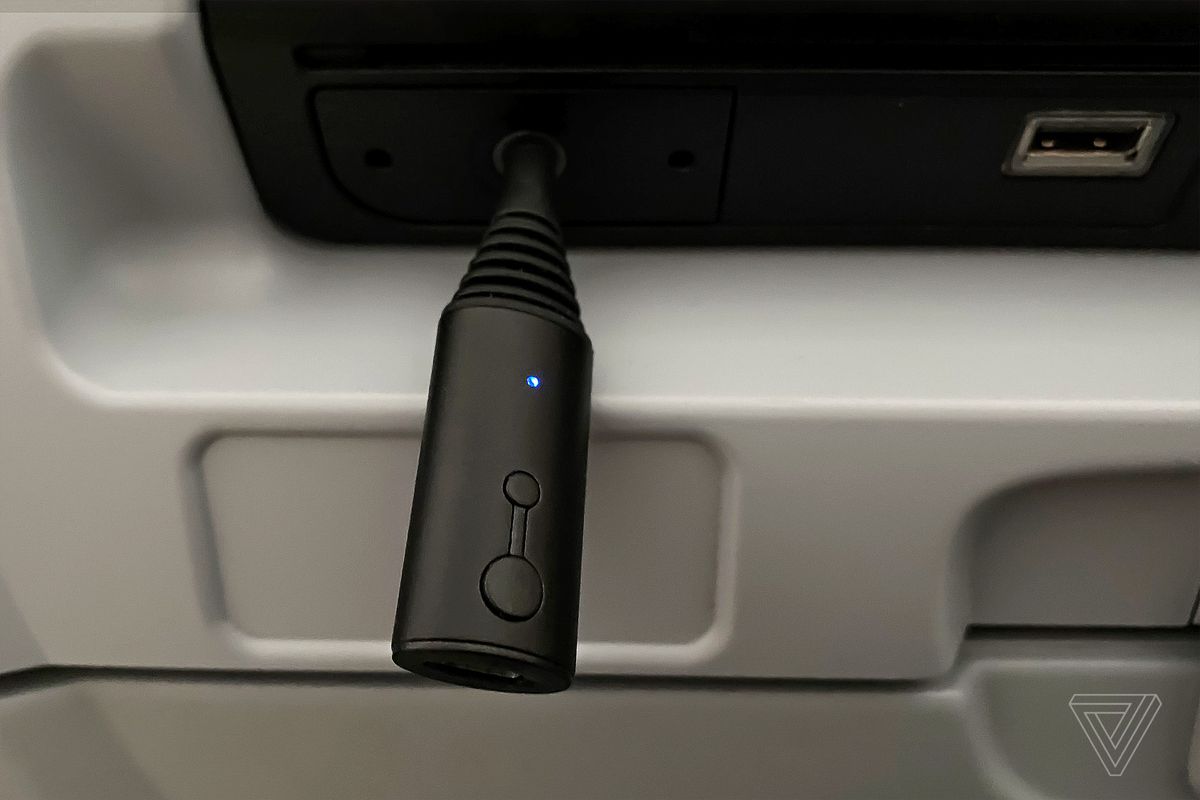 The Hagibis adapter is very small and very inexpensive, but it lacks some of the user-friendliness of the Twelve South versions. Photo by Dieter Bohn / The Verge

Then there’s the most obvious gotcha of all: battery life. On the small end, the tiny little Hagibis I tried only claims to last for five hours. The AirFly classic claims eight hours, while the AirFly Pro claims 16.

For me, the extra 20 bucks or so for the AirFly Pro is worth it. You get a longer battery life, and you get the option to turn it into a Bluetooth receiver in a pinch if you want to use it in a car or at an Airbnb. I’ll also admit that the extra money is worth it because the AirFly Pro charges via USB-C instead of Micro USB, and you have the option to pair two headphones to it at once if you want to watch a movie with somebody. 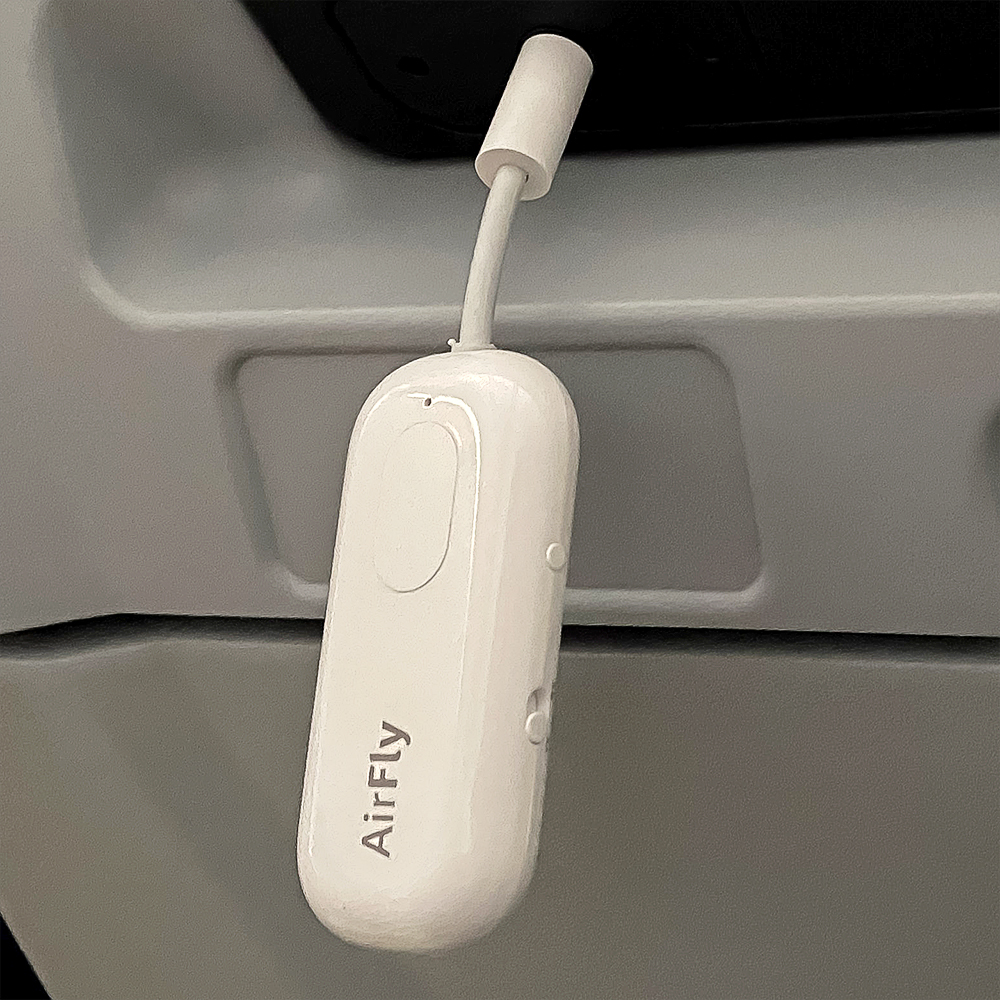 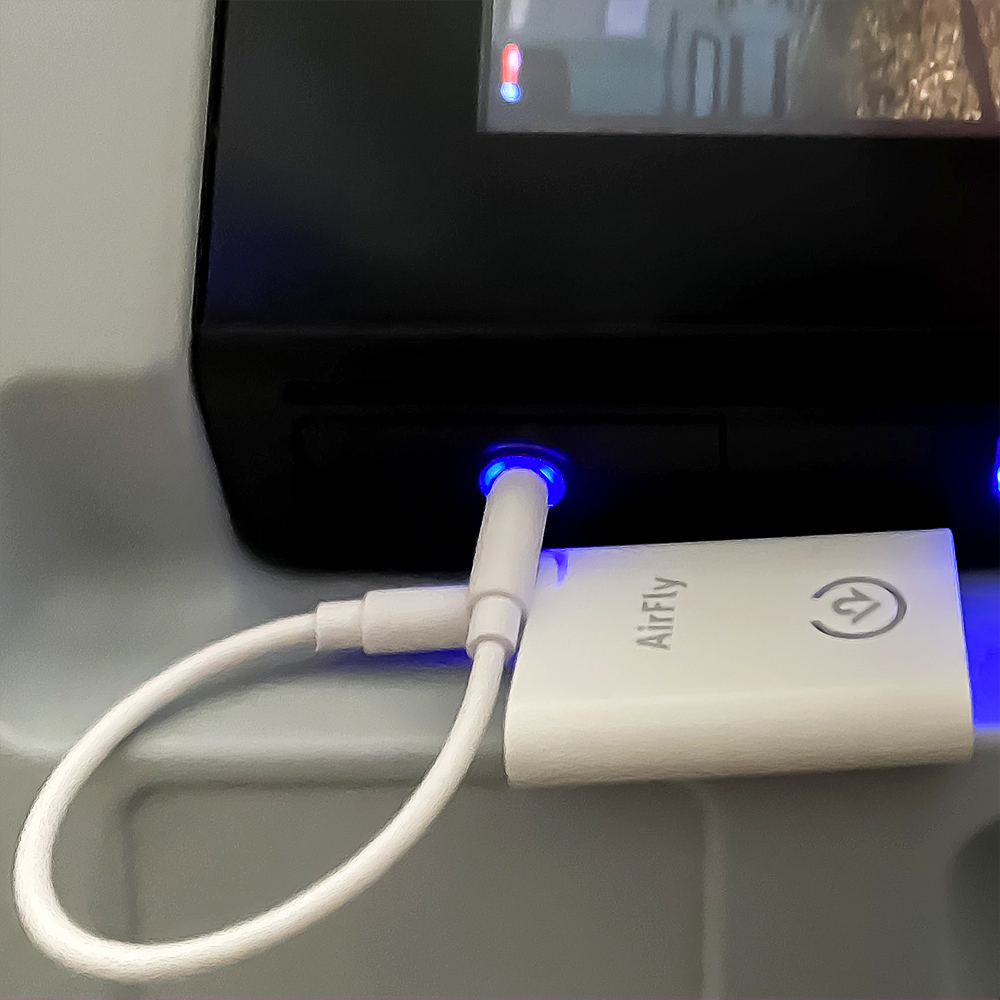 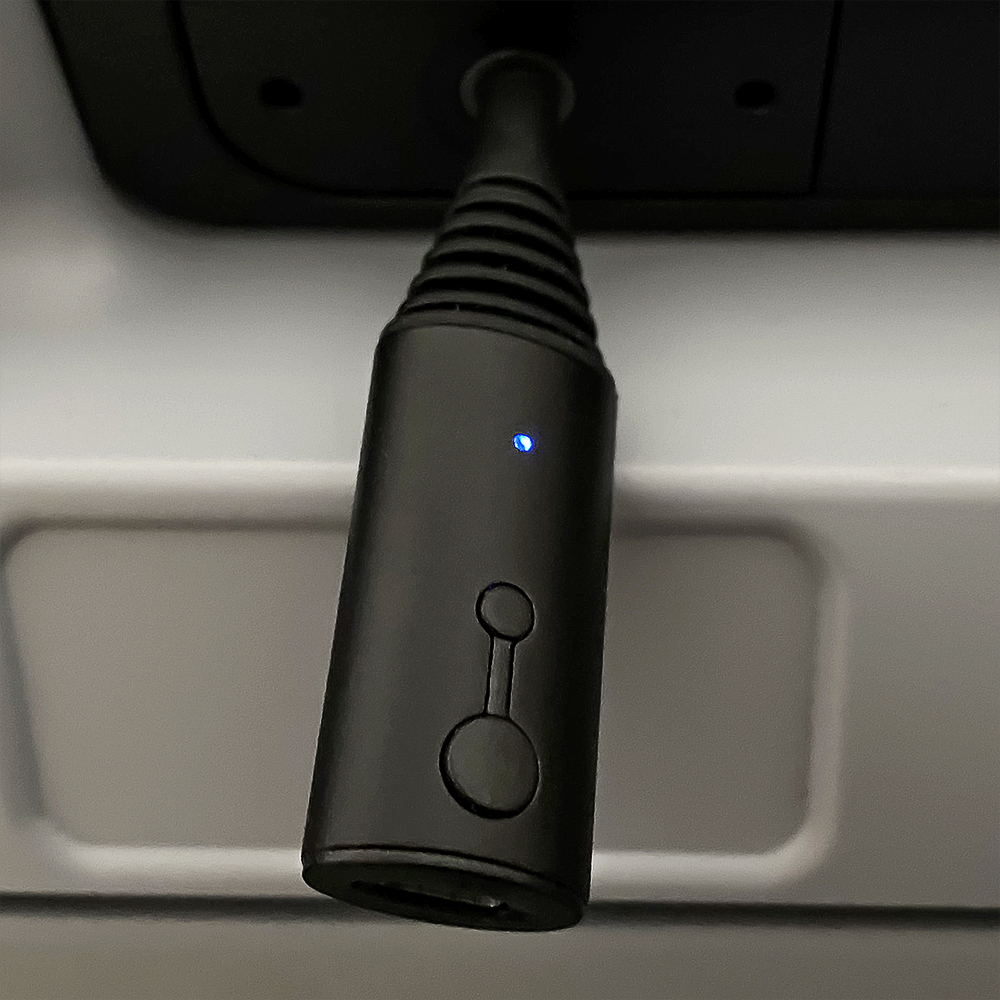 Is any of this as convenient as simply using traditional wired headphones? Nope. That’s why I have a second strategy for dealing with this issue.

Many airlines have Wi-Fi systems that provide entire entertainment libraries locally for streaming to your personal phone, tablet, or laptop. You can log on and watch movies without having to pay for the rest of the internet and without having to carry around a second dongle.

It could be a good option, especially if you’re not worried about the battery life on your device and / or the space on your tray table. 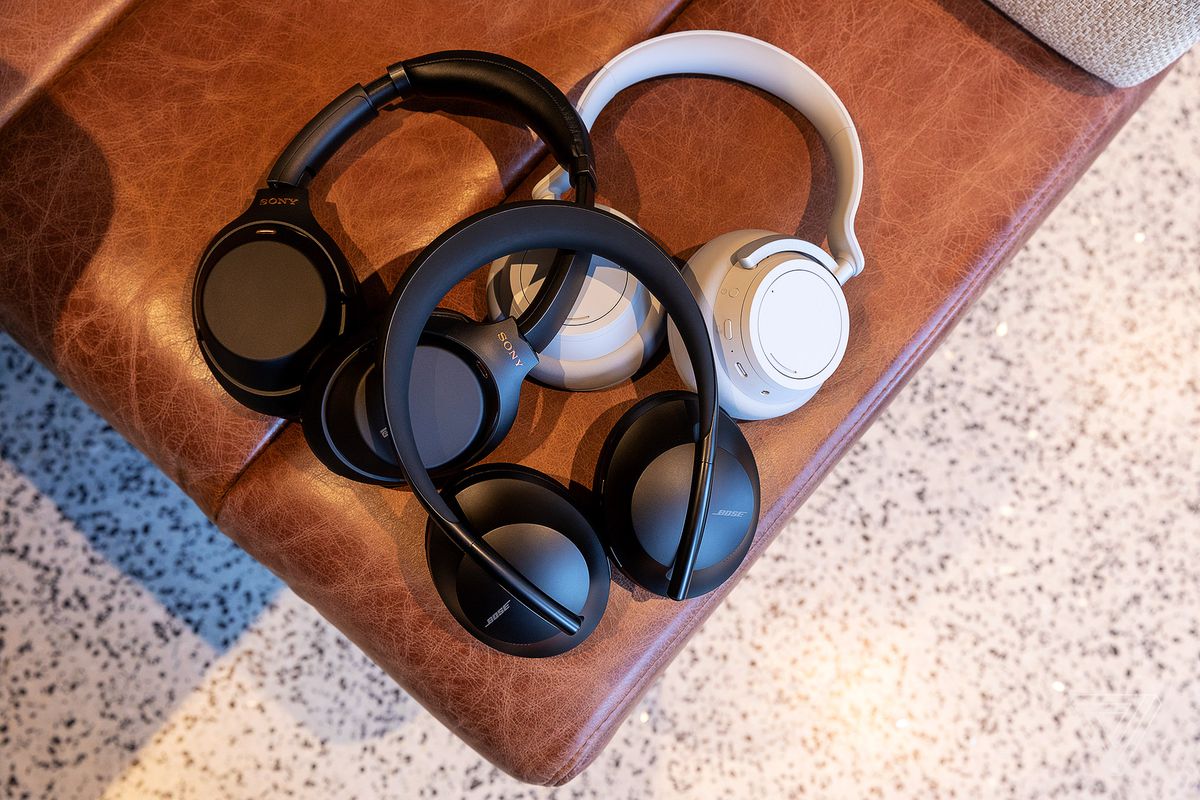 Another good option: just carry around a relatively inexpensive pair of wired earbuds for the plane ride. You may lose whatever noise cancellation you’d have on your wireless headphones, but it’s much simpler. Some airlines give away (or charge a nominal fee) for nearly disposable earbuds. They do not sound great, but then again, you’re watching an Airplane Movie on an Airplane Screen, so how precious are you really going to be about the sound quality of your headphones?

Last but not least: spend the (significant) money for a good pair of over-ear noise-canceling Bluetooth headphones. We like the Bose Noise Cancelling 700 headphones right now. They’re lighter and more comfortable for long-term wear than the Sony 1000x M3 headphones. They all have 3.5mm headphone jacks and come with a cable that can plug into the headrest. Just don’t forget to bring that cable along with you.

Maybe someday, every airplane seat will have its own Bluetooth pairing option. Given the quality of software on those things, though, that sounds like an entirely different kind of nightmare.

Vox Media has affiliate partnerships. These do not influence editorial content, though Vox Media may earn commissions for products purchased via affiliate links. For more information, see our ethics policy.

How to install extensions on Microsoft’s new Edge browser

How to upgrade from Windows 7 to Windows 10 for free

How to responsibly get rid of the stuff you’ve decluttered

How to watch the 2020 Golden Globe Awards online

The growth of cognitive search in the enterprise, and why it...

How to avoid Star Wars: The Rise of Skywalker spoilers