This week, we spoke with Moving Pieces co-founder and president Patrick McAven as well as director of technology Kyle Erf following the studio’s launch of Dodo Peak on Apple Arcade and Nintendo Switch.

Patrick McAvena: My partner Kyle and I are fairly new to the games industry, with Dodo Peak been our first commercially released game. Previously I worked as a VFX and 3D artist in advertising for about a decade and Kyle as an engineer in the tech world for several years.

I always wanted to make games ever since I was pretty young. I wanted to get into the games industry during college but I graduated during the 2008 financial crisis and felt it was a safer bet to get into advertising. I learned a lot of skills as a 3D artist working on TV commercials that definitely translate into the games work that I do now.

About six years into my career in advertising my itch to make games started to grow again and this time I got more serious. I started dabbling with Unreal Engine and started working on a project with another friend which eventually became Dodo Peak.

My career had always surrounded freelancing which gave me a lot of flexibility to take time off in between projects and to focus on Dodo Peak. Until we officially became a launch title for Apple Arcade, I was the only developer on the project and the only person working on it in any full-time capacity.

Eventually, once we had the opportunity to hire everyone full-time on the project we started Moving Pieces, relocated to an office, and all worked really hard on getting the game ready for release. Moving Pieces just celebrated its first anniversary in June of this year.

Kyle Erf: I’m a huge nerd. My college degree is in programming and I’ve spent my entire adult life working in privileged positions at tech companies, however my goal since I left college was actually to make it as a comedy writer or performer. For years, programming was my day job while I worked a second job doing unpaid comedy shows around NYC and making some pocket change via freelance writing work.

I was actually finding success in my freelance writing career and contributing to a lot of reputable websites. My plan eventually became making it onto one of a handful of comedy internet publications as a staff writer, but then in 2018 that dream shrivelled up as nearly every one of those websites became insolvent and laid off all of my friends. 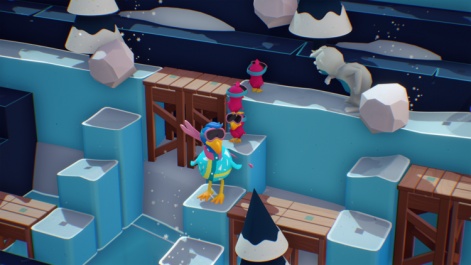 After launching on Apple Arcade, Dodo Peaks has made its way to Nintendo Switch

With that dead end, I tried to think of what advice I would give to someone in my position. I was a creative person and a talented programmer and I loved video games, so I bit the bullet and signed up for a class on game programming, which is where I met Patrick.

We hit it off and worked on our own small project throughout the class and months afterwards. Patrick then tells me about his other game and how it’s going to help launch this new platform. Following this, I put in my two weeks’ notice.

Patrick McAvena: I think like any small business, it’s really rewarding, exciting and challenging. When I first started as an indie my big focus was to just finish our first game. Now my focus has shifted into making new projects, supporting old ones, making sure everyone is creatively fulfilled, and also ensuring the studio has a good financial trajectory so we can keep making games and doing what we love.

Patrick McAvena: One of the biggest challenges I’ve faced so far was getting started, which meant self-funding the project with my savings for well over a year. I didn’t have a job to quit to start my career as an indie, as I was always freelance, which made taking off time from paid work a bit easier.

When you’re funding the project’s development with your own money and have no previous projects that are bringing anything in, it can definitely be a bit stressful, to say the least.

Kyle Erf: I think most people who haven’t taken the leap don’t realise all the upsides of being part of a large group with an engrained hierarchy and a set plan to follow.

The hardest part of starting a company in a creative field is that you don’t really know what you’re making while you’re making it. Most of the early months of a project are just figuring out what your game is. There’s no standard you can look at or test you can run to know you’re doing the right thing.

We started to experiment with ways to incorporate free-to-play into Dodo Peak, ultimately to find out that it just didn’t make sense for our game

Patrick McAvena: For me personally, true success is a few things. Being proud of what you make, enjoying the making process, and doing well enough financially so that you can continue to make things you enjoy.

Patrick McAvena: I think what’s really exciting about mobile games right now is that the line is blurring between mobile gaming and games in general, allowing developers to just make the game they want regardless of platform and release it to as wide of an audience as possible.

While there are games that are designed for certain platforms, and rightfully so, I think the ability to have the same experience on mobile, consoles, PC etcetera. is something exciting and is pretty new within the past few years.

Could you tell us about Dodo Peak and why the game felt right for mobile?

Patrick McAvena: We had been really inspired by classic arcade games, with their easy-to-learn, hard-to-master gameplay, and felt this would really translate into a game that was great to play on mobile. We designed Dodo Peak for the casual/mid-core audience. The early game is a bit more casual, while we make it a bit more challenging with our later content.

How did the partnership come about with Apple?

Patrick McAvena: Most folks will tell you that if you’re making a mobile game you need to make it free-to-play. We started to experiment with ways to incorporate free-to-play into Dodo Peak, ultimately to find out that it just didn’t make sense for our game.

Around this time, we heard that Apple was launching Apple Arcade. We sent them a demo of the game as well as a pitch and ultimately became a part of the launch line-up which we were really excited about.

What attracted the studio to create a game specifically for Apple Arcade?

Patrick McAvena: We were really attracted by the opportunity to create a game that we really wanted to make and do not have to worry as much about how we would monetise it. It also allowed us to reach a much wider audience than I think we could have on our own.

How is the studio coping under the current Covid-19 pandemic?

Patrick McAvena: Luckily, we are a small team so I think communication and organisation have been a bit easier for us during the pandemic than at bigger companies. However, the pandemic hit right as we were starting to work on a new project, which definitely created some challenges as we were used to all working together in person and developing something new requires especially more brainstorming and collaboration in the early stages.

We also had literally just moved into a bigger office and out of a co-working space which we were really excited to work in. Unfortunately, it has served as more as a storage space during the pandemic, but I hope we can all return to working there at some point.

Patrick McAvena: With our Dodo Peak now launched, we are currently supporting it with new content and have now launched on Nintendo Switch too. It was a lot of work to get Dodo Peak released, so having the opportunity to work on something new is really exciting.

Patrick McAvena: I am always really fascinated by the possibilities of procedural generation and love social games, so I would probably make some sort of crazy No Man Sky-like procedural RPG but with more of an emphasis on playing with friends.

Kyle Erf: Get really good at multiple things or to put it another way: be willing to learn as much as you can as quickly as you can.

Patrick McAvena: For most indie developers, it’s just being able to make a living by creating games, which can take a good amount of time to accomplish. My biggest piece of advice here would be to really enjoy what you’re making as much as possible – that will translate into success if you stick with it.

‘Thronebreaker: The Witcher Tales’ from CD Projekt Red Just Launched on iOS as a...