It’s hard to believe that the first summer of gaming surrounding Niantic‘s worldwide catch ’em all took place four years ago. It’s even more bizarre when you think about how the current lockdown situation that has plagued large portions of the world has changed the game, possibly forever.

Pokemon GO’s arrival in July 2016 brought about a new way to play mobile games for a mainstream audience, creating some truly memorable months with many quipping that the period was the closest the planet has ever come to reaching world peace.

Still, as we all carry on life in completely opposite circumstances compared to launch, Pokemon GO has continued to grow and thrive among a community of dedicated users that have been through the good, the bad, and the ugly side of just what the mobile title can accomplish.

Data doesn’t lie. Though half of the web will maintain that Pokemon GO is “dead”, statistics paint a completely different outlook. In four years, Pokemon GO has accumulated an estimated 567.7 million lifetime downloads and earned close to $3.6 billion (as provided by Sensor Tower) from player spending alone. The game is simply in a (Sinnoh) league of its own, placing itself alongside mobile giants like of Clash of Clans, Candy Crush, Honor of Kings, and more. 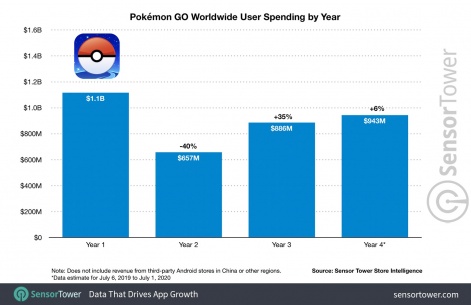 User spending for Pokemon GO every year since launch

The US dominated Pokemon GO’s market audience pretty instantaneously, generating $1.3 billion of the overall revenue figure and 105.2 million of total installs. While strong in the West, Japan claimed second in player spending at $1.1 billion, which is remarkable when you consider that the country is approximately 2.5 times smaller in terms of population. The Pokemon IP has always resonated well in its home turf, but this stability surrounding GO is pretty incomparable on the mobile sector.

Speaking of longevity, this is one crucial aspect that, no matter the platform, developers naturally worry about. Most frequently, it’s the opening weeks of a game’s launch where a game will generate the biggest commotion. It’s new, it’s fresh, it’s part of the zeitgeist.

Then slowly over time, the conversation dies down and only those that are truly committed stick around for the long-term. Pokemon GO’s trajectory, however, has zigzagged (not Zigazagoon’d)

Year two is the exception to this, suffering from a lack of content and direction with what to do with the treasure trove. Slow build-up to the rollout of generation two and issues surrounding Pokemon GO Fest resulted in a drop of nearly half in revenue to $656.7 million, and less than six times the installs at 58.6 million. 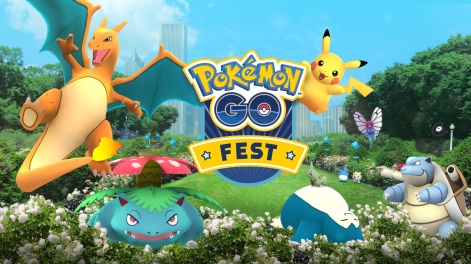 Only halfway through this 12 month period did features and events such as Community Day, Field Research, and Trading start to materialise. These add ons were pivotal and went on to shape the next couple of years.

Year 3 witnessed a return to form as Niantic began to find a solid structure via new content, regular events, and feedback from the community being taken onboard – specifically, quality of life details to streamline play and minimise teething issues that were there from day one. And this showed, with player spending jumping back up to $886.3 million. Downloads may have only risen to 62.5 million, but those that stuck around invested heavily.

This run continued into its fourth year with further generations being added, more events, Team Rocket’s infiltration of the app, and an official Battle League. All of this (so far covering July 6th, 2019 to July 1st, 2020) has amounted to $943 million from 55.8 million downloads.

It’s incredible to think that a game which is primarily meant to be played outdoors, and with other people, has somehow achieved this number in a time where people legally cannot meet up and are urged to stay indoors.

As someone who was heavily invested in the first two years, dropped off in the third, and sporadically plays in the fourth, it’s been fantastic to see the community grow around a silly game collecting virtual monsters

What these numbers show more than anything is that Pokemon GO is going nowhere. Months of bugs and in-game issues, a slow rollout of content, a disastrous Festival, and a major drop off from players ,all coupled with a deadly pandemic that sends the majority of the world into lockdown, and Pokemon GO continues to show no signs of slowing down – regardless if of whether players catch ’em all or not.

We previously spoke about how Pokemon GO has transformed into an experience for the hardcore, not the casual.

Why Are Traditional Investors So Hungry for Yield Curve Control?