I have absolutely no business reviewing the Livescribe Symphony digital pen. As regular readers of my iPad Pro Diary will know, I Do Not Do Writing. Or drawing. I haven’t handwritten anything substantive for about three decades. If I’m writing anything more than a few lines, I’ll use a keyboard. If it’s shorter, I’ll generally dictate to Siri.

I did eventually find a vague excuse to buy an Apple Pencil, but even that was a bit of a stretch and I still don’t use it for anything else. All of which doesn’t make me an obvious candidate for a digital pen designed for use with paper …

But while I view paper notepads as quaint historical artifacts, my girlfriend loves them, for reasons I’ll let her explain.

I love the way I can completely make a notebook my own. I love doodling, for example, so something that started as very straightforward notetaking becomes art.

So this is effectively a review by proxy: I’m just reporting back on her experiences. 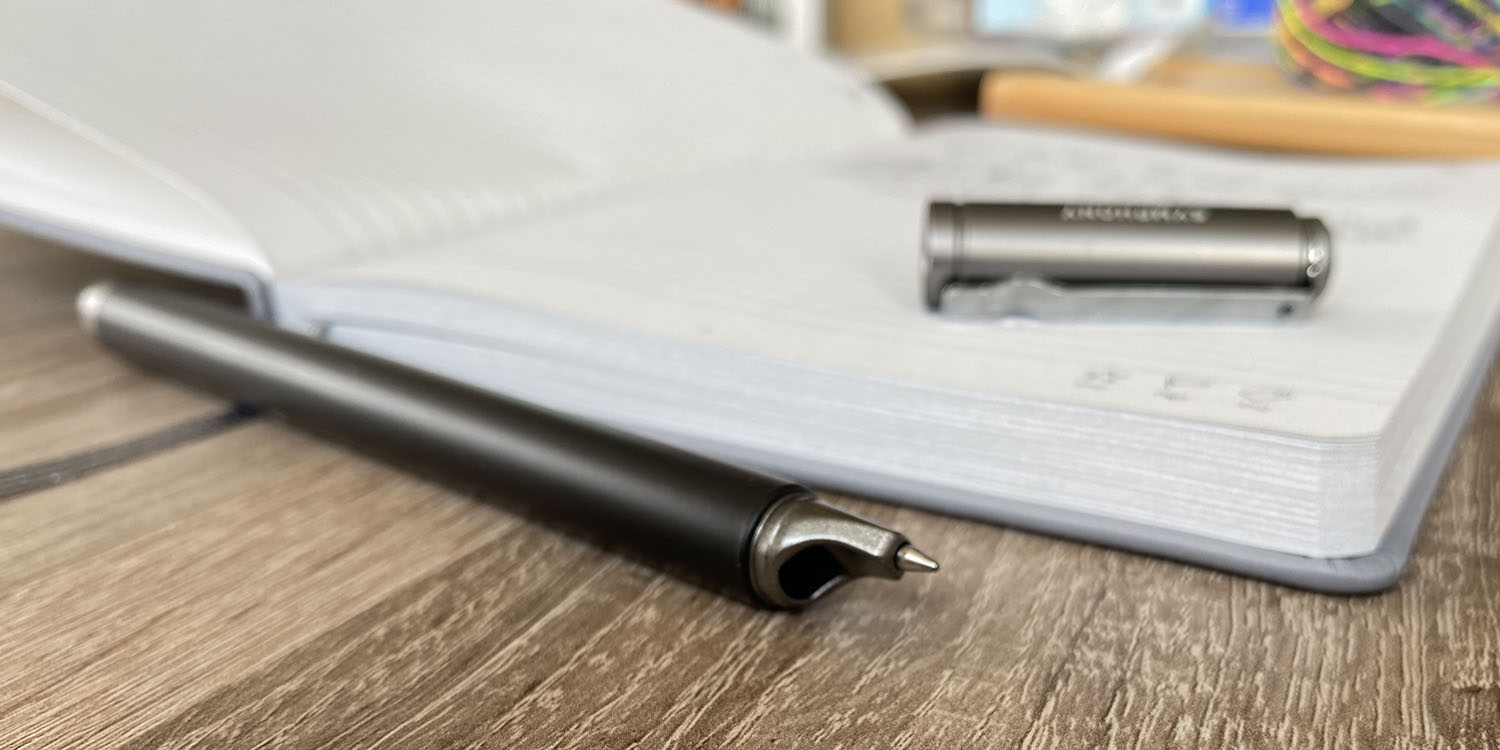 What is the Livescribe Symphony digital pen anyway?

I may have no use for one personally, but it’s definitely something I consider a cute gadget.

It’s a conventional pen, which writes on paper, with a couple of additions. First, a camera, pointed down at the nib. This records everything the pen writes and transmits a digital version of it to a companion device – an iPhone or an iPad.

It can do this live – whatever you write or draw appearing on your iDevice in real-time – or it can store more than 1,000 US letter pages worth of writing and drawing for syncing later. It does this via a number of different cloud services, including Dropbox, Google Drive, and OneNote. It can also feed your notes into Evernote.

You can choose the format in which your words are stored: either the original handwritten text, or it can use built-in optical character recognition to turn them into plain text.

Second – and this is what distinguishes it from most other digital pens on the market – there’s a microphone. You can activate this when you want to capture live sound alongside your notes. This would obviously be useful for things like lectures and interviews, where you can jot down summary notes and then easily play the accompanying audio for any section of it.

To activate the microphone, you tap a recording symbol that is printed on each page of the notepads. Tap the stop symbol to stop it. Neat!

How does it work?

If using a camera to capture pen movements sounds pretty damn clever, there is a slight cheat involved. The pen needs to be used with paper which contains barely-visible microdots, which help it track the movement of the pen across the paper.

Of course, that means buying special notebooks, which do carry a price premium over standard ones. But they are not crazily priced compared to regular ones of equal quality, and there are third-party ones available too – including Moleskin. Finally, if you really object to paying for them, or want to create something customized to your own needs, Livescribe provides free templates which let you print your own microdot paper in various formats.

The pen looks pretty ordinary. It’s black metal, with a gunmetal grey cap, and I don’t think anyone would look twice at it unless they happened to recognize the brand name.

There is definitely something quite spooky or magical about seeing live replication on an iPhone or iPad of whatever someone is writing or drawing in a basically ordinary notepad! Here’s a quick video:

And here’s what Steph has to say about the feel when writing:

It feels exactly like a normal pen. If you’d just given it to me as a pen, I wouldn’t have known it was a gadget.

And the overall experience:

For me, it’s the best of both worlds. The tactile writing experience, but with the ability to easily share content with friends. For example, I love to create textile art, and in this way I can sketch ideas or designs and then share them with other artists, so it’s perfect for collaboration.

OCR performance is impressive, with just the occasional glitch.

The Livescribe Symphony costs $110. Notebooks cost from around $6.25 each when bought in multipacks.

If you love writing on paper but still live a mostly digital life, then this is the ideal approach, bridging paper and digital worlds without even having to think about it. The ability of the pen to sync later means I don’t need to decide at the time to capture things digitally, but can choose to do this later.

The pricing of the pen is fair for what it is, and I’d often spend more on a traditional notebook, so all in, it strikes me as good value for money.

The Livescribe Symphony is available from Amazon, priced at $109.99. Notebooks are available in various sizes and formats, individually and in multipacks.

iOS 14: How to use a private Wi-Fi MAC address on iPhone and iPad

iOS 14: How to set Google Chrome as your default browser on iPhone

PSA: If you have an Apple Watch Sport Band, here’s a better approach to...