Teis Anker Mikkelsen is a founder at Swedish/Danish startup Multiscription, which has just launched its Unleash’d product.

The ways in which we monetise mobile games have never been more data-driven or standardised.

Yet, this is the longest period in mobile gaming where we have not experienced any major upheavals in the way mobile games are marketed and monetised.

That was certainly the impression I had as I took part in the recent PocketGamer.biz discussion about the future of monetisation.

This raises the question of whether some disruption would be a good thing; perhaps our approach to monetisation has become a bit… stagnant?

Why not more subscriptions?

When we look at how different business models which use free-to-play monetisation, we can rightly be proud that other industries look to mobile gaming as a template.

But it seems strange to me and, I hope, many others – that, conversely, subscription models largely remain absent from mobile gaming at the same time they have become the way we buy everything from music to coffee pods.

Yes, we have subscription models from Apple and Google – but these are as much about promoting those companies than they are about the games. This is about the opportunity for subscriptions specifically within the F2P economy.

There is plenty of data that clearly shows consumers are comfortable with subscriptions in digital media outside of games; I can safely predict that the majority of PocketGamer.biz readers subscribe to a few of them, as do I.

So bringing it to F2P mobile games seems an obvious thing to do.

Beyond mobile, subscriptions are growing as part of the monetization strategy for console gaming, where 70% of revenues in 2019 were derived from DLC, digital game downloads, and subscription access fees – according to James Manning Smith of Futuresource Consulting.

The mobile F2P economy has worked incredibly well for many publishers, but I believe we are now seeing its limits as consumers show they have different expectations, especially around advertising, convenience and perceived value.

We should be looking at other industries for inspiration.

I’ve been part of a team working on our own subscription platform, Unleash’d, which we plan to launch later in 2020.

We are using the content bundling approach to appeal to subscribers through the perceived value for money, as well as building exclusivity into the offer through unique skins, bonus items or extra content that can’t be purchased through IAP.

Importantly, the subscription won’t be about access to the game, but about access to an extra level of value, so that superfans of a game can spend on IAP as well as a subscription, or a non-paying player who is happy to watch rewarded video can still have that option.

The idea is to create a subscription service that F2P publishers can use both as a monetisation tool and also as a cross-promotion and discovery platform, but without disrupting what makes F2P work, which is the seamless integration of monetization into the gameplay experience.

It wouldn’t be realistic to suggest that subscription revenues could be a replacement for IAP or ad revenues. But I do think subscriptions can complement existing monetisation in a way that creates a better experience for consumers, offers an additional choice, and which creates a new way for publishers to promote their games.

There is obviously the discoverability issue faced by all publishers outside of the Top 1% where it can be a struggle to dedicate the kind of UA and marketing budgets to attract their target audience.

If more publishers can combine their games into this kind of subscription model, I believe publishers will have a lower cost acquisition and discovery tool, and gamers will have a great way to experiment with new games without any pressure.

As the below chart from McKinsey’s research into e-commerce preferences shows, consumers see subscriptions as a way of getting better value for money – especially as it’s easy to offer an incentive for that initial sign-up.

Once people are using a subscription service a lot of people are happy with it, and we can see that positive recommendation is a very powerful driver of new subscriptions. 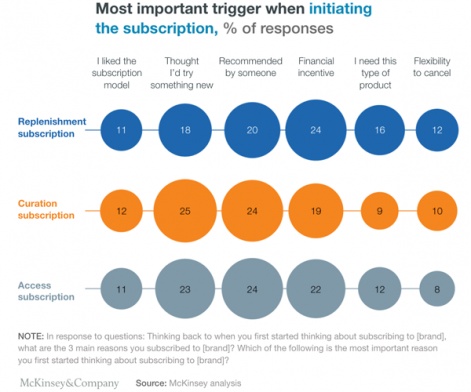 If we look at the current use of subscriptions, the most common are for music and movie services; everyone is familiar with Netflix, Amazon Prime, Spotify and Apple Music.

Another chart, this time from Superdata, shows that subscription has become the preferred monetisation model for film and music in almost every market. 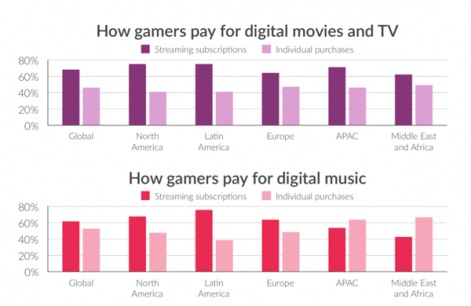 Beyond games, we do see quite a lot of experimentation with monetisation in mobile apps.

According to data from AppAnnie, 19% of non-gaming app developers they surveyed have used a subscription model – versus only 9% of mobile game devs. We can see from this data that games companies overwhelmingly favour in-app purchases and in-app advertising. 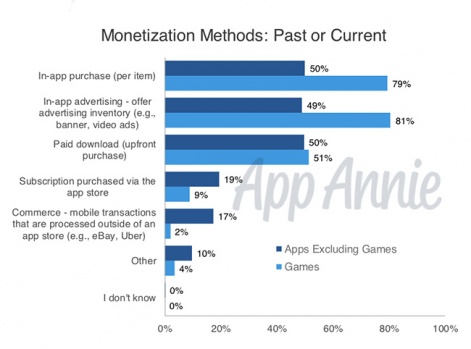 We are seeing experimentation with elements of subscriptions in mobile gaming; the Battle Pass – a time-limited subscription that has been used with great success in Fortnite, but which has also worked well in mobile F2P games from Clash of Clans to Mario Kart.

In China, VIP memberships are hugely popular with many gamers, offering unique content and access for a monthly fee. Plus, Apple with its Arcade service, and Google with its Play Pass have both introduced subscription services aimed at premium mobile games.

These approaches all work because, in different ways, they are offering consumers a very clear value proposition – spend $, get $$$ of content. There are no hidden extras, no problems with loot crates or cool-down timers.

We know that the F2P model relies on a small number of high spenders, yet a lot of people are not confident paying under the current model, with most freemium apps seeing 5% or fewer users spending money.

Of course, building a subscription offer for a single game will only really be of interest to super-fans of that title, likely to be the VIPs or heavy spenders that we know are disproportionately responsible for such a large chunk of mobile revenues.

In this scenario, there’s evidence to suggest that you can get better engagement and therefore better lifetime value (LTV), but it’s hardly going to broaden the user base or bring in new paying players.

Publishers need a way to create that network effect by combining multiple games from multiple publishers into a single subscription offer.

To achieve that, publishers need a way to create that network effect by combining multiple games from multiple publishers into a single subscription offer.

That is instantly a more compelling, and a very simple and clear, value proposition to your audience – after all, it’s what they are used to seeing in other subscription services, and it’s what Apple and Google have done with non-F2P games.

The last point I’d make to support subscriptions is what the gaming economy may look like post-Covid. Mobile games have seen a big increase in playtime, but nothing like the same increase in spending.

I think that, if this continues, the F2P whale economies will be hard to sustain at the same level as today. Therefore there will need to be a more “value for money” approach, as mobile games will be competing against many other forms of entertainment for our hard-earned money.

This means it is even more important that we use this opportunity to look outside of current monetisation strategies that may work for those who get it right, but which ignore the changing ways by which consumers are consuming content. Rather than double-down on what is tried and tested, let’s work together to try something new.

Electronic Arts leadership has been in “wartime” mode since coronavirus pandemic