This week, we spoke with Black Bears CEO Oleg Kapitono about the ongoing development of tower defence title Towerlands and why the indie studio is unlikely to return to an office format.

Oleg Kapitono: We started in 2012 as a small group of enthusiasts and tried to make some arcade games for touch devices (now known as hypercasual). The first four years were really hard. We struggled to find success and occasionally took on some outsourcing tasks.

Our first success came in the form of Drilla in 2016, which went on to accumulate three million downloads. After this, we strongly decided to begin working the mid-core genre.

There’s no magic or rainbow unicorn that helps get this done, just regular, hard work.

As I mentioned, we are not a typical indie team. We have been working in games for eight years already but we do consider ourselves still indie, as we have never received any venture investment and are still relatively small.

A typical day for our core team of people consists of playing many games from different developers while searching for great new features that could improve and be implemented into our new and already existing games. There’s no magic or rainbow unicorn that helps get this done, just regular, hard work. This is made so much easier when you love what games you are making.

Two things in particular: first is death valley. We’ve encountered this twice. This is when your current games cannot generate enough money to keep all of the team, however you really need the team to continue onto the next title. 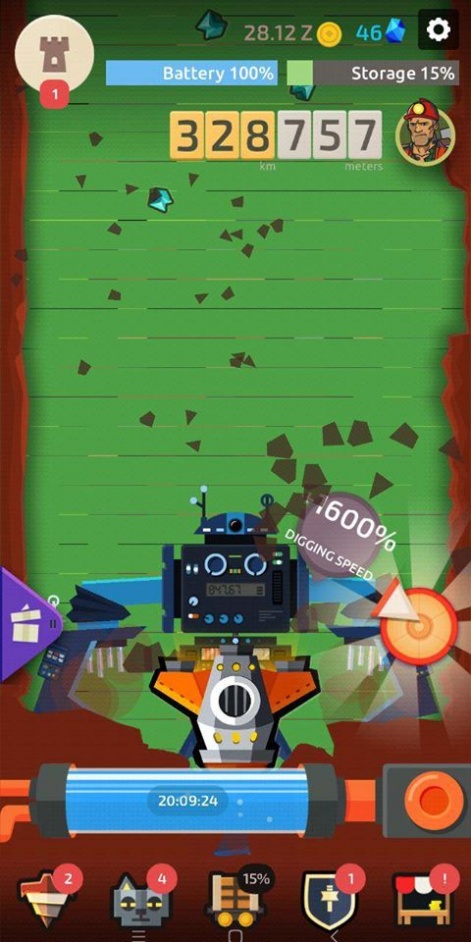 Since launching in 2016 for iOS and Android, Drilla has accumulated more than three million downloads

The second biggest challenge has come from being disappointed about our big games, which did not perform on launch. When you work on a game for three to five months, only to see it go downhill after launch, it’s very sad and troublesome. This would be even worse if our development cycle was 18 months.

If you can work on the games you want to make all of the time and games you produce are liked by users for years, then that sounds like success to me.

I do think it’s the best place for small teams right now. Publishing a game only needs three clicks thanks to the game stores. Not to mention, it’s much easier to obtain good search engine and organic traffic on the mobile market – especially when compared to three to five years ago.

Could you tell us about Towerlands and why the game felt right for mobile?

We want players to be able to logon to Towerlands anytime in the next few years and find something new in it.

Towerlands is a game for all people. We have players in 100 countries with our analytics pointing to different demographic groups. It’s great for playing anyone in small sessions, whether that train, bus or at home and you can progress well without the need to invest too much time.

We have lots of content available today and have much more planned. We want players to be able to logon to Towerlands anytime in the next few years and find something new in it.

How are you as a studio coping under the current Covid-19 pandemic?

The situation was certainly a shock for all of our employees and the company as a whole. Before Covid-19 began, we all worked in the office however we transitioned online with no big troubles. Now that we’re completely remote, I’m not sure if we will return to the previous format. Unlikely.

We are currently working on several updates for Towerlands with the game being our main project at the minute, and we don’t want to disappoint our users. Also, we are trying to make something new for the tower defence genre, with two prototypes in the works.

Something set in the real world. Like Pokemon GO but with real people and real GPS. I don’t really like augmented reality as a graphic feature but if you can play via the path, that could be cool. Unfortunately, there are few games in this genre alive and the ones that are, only look to build off already existing licenses.

Play more games across different genres and platforms. Do not fear the release you game. The reality is that nine out of ten games will fail, so you must survive to your 10th game.

The Fed Is Going To Buy Stocks – Forbes