The audio world is all about wireless speakers these days, and even very traditional audiophile companies are getting in on the action, but there are still plenty of people who have much-loved component hi-fi systems they have no intention of replacing. And that’s where the Cyrus One Cast comes in.

There are various options for bringing AirPlay capabilities to a stackable hi-fi system, with Apple’s old AirPort Express routers a popular and inexpensive approach. That can be a somewhat flakey experience, but you can pick up used units for under $50 apiece, so it’s certainly a cost-effective route.

It gets you both AirPlay 2 and Bluetooth, and it’s a rock-solid solution, but it’ll cost you a cool $2,000.

It’s not, of course, just a wireless audio adapter: It’s a powerful and capable modern amp that aims to live up to the heritage of the original Cyrus 1. Launched more than 30 years ago, the original still holds a place in the heart of many audio enthusiasts, even today. The Cyrus One Cast (just Cyrus One from now on) is an amp that aims to remain true to the company’s roots, while bringing it bang up to date.

Of course, some people may stop reading right there. If you have an amplifier you love, it may be the very last thing you want to replace. But if it’s your speakers you love, and you’re open to switching to a modern Class-D amp, read on. 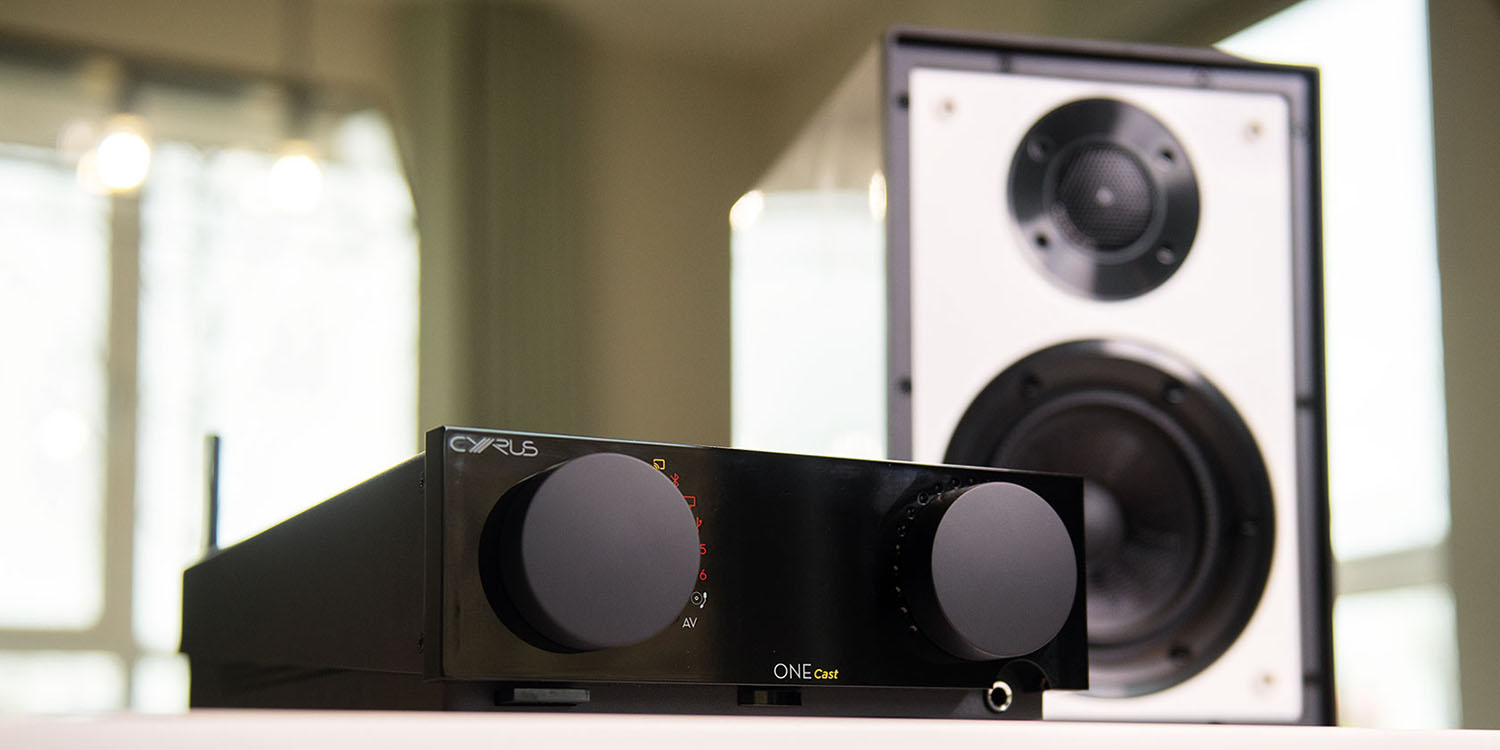 Cyrus One: look and feel

As with all Cyrus amps, the Cyrus One is a half-width unit, so would make a direct swap. The design is also reminiscent of the original, with large dials on a black facia, but with two rather than three. It’s 15 inches deep by 8.7 inches wide by 3.4 inches high. It weighs just over 12 pounds.

Looks are always subjective, but I’m a fan. It’s a modern take on a classic design, and to me wouldn’t look out of place in either an older or more modern stack.

The left-hand dial is the source selector, while the right-hand one is the volume control. Each has small but exceedingly bright indicator LEDs; you can use the remote to dim these. Below and to the right of the volume control is a full-sized headphone socket, which has its own amp.

Both dials have a pleasant feel, though they are a little light for my personal tastes.

Impressively, there’s neither fan nor heat-sync in the chassis: That is, says the company, thanks to the efficiency of the Class-D design.

There’s an included remote control, which is a rather horrible plastic thing that doesn’t feel remotely like a Cyrus logo belongs on it. I honestly think high-end audio companies would be better off not including a remote than offering a cheap and nasty one. 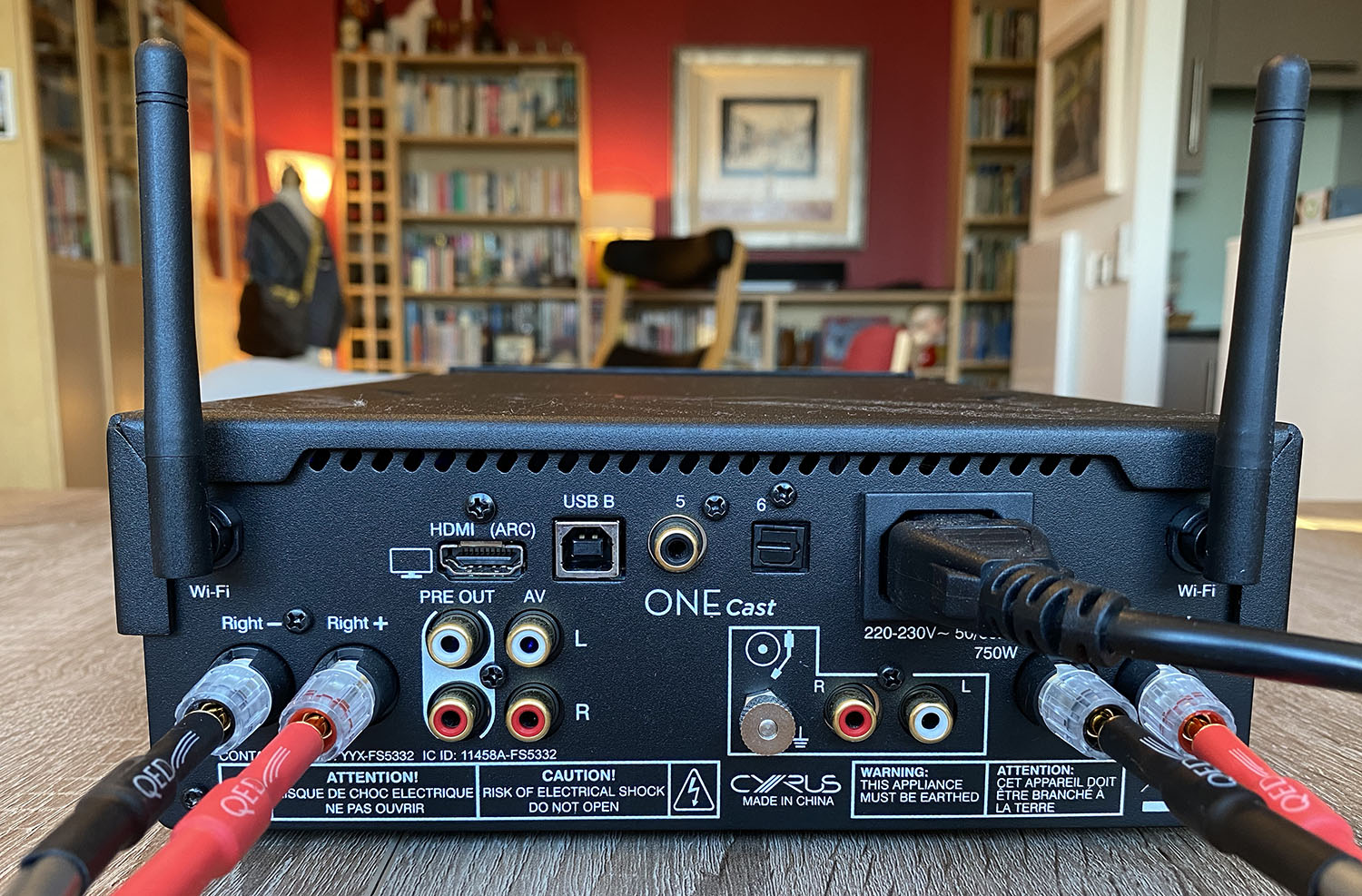 Cyrus has covered almost all the bases here, old and new.

On the analogue side, you have moving magnet photo input for a turntable, as well as phono input for AV integration.

Digital wired sources comprise Optical Toslink, coaxial digital, HDMI (ARC), and hi-res USB — the latter supporting a digital feed of up to 32-bit 192khz, as well as DSD 128. The one thing it lacks is an Ethernet port.

Wireless sources are Bluetooth, AirPlay 2, and Chromecast. It describes itself as supporting Siri, Alexa and Google Assistant, but there’s no built-in mic, so realistically you’d be using the voice assistants on your phone. For example, “Hey Siri, play my favorites on the living-room speakers.”

Cyrus has been smart to have setup occur through the Google Home app rather than its own app. The reason, the company says, is that it doesn’t see a need for a Cyrus app: People want to control their music through their existing streaming apps, and that’s an approach I wholly endorse.

Setup took just a few minutes, simply finding the amp, naming it and giving it the Wi-Fi router credentials. Once that was done, it was immediately available as an AirPlay 2 speaker.

You also don’t need an app for firmware updates: Those happen automatically over the air.

When you’re using it as an AirPlay speaker, the amp automatically wakes from sleep and auto-selects AirPlay as the source.

The amp offers output of up to 100 watts per channel, and like other Cyrus amps, it automatically measures the impedance of the connected speakers and adjusts its output accordingly.

I tested it with the Cyrus ONElinear speakers. These are billed as bookshelf speakers, but they are capable of being paired with any amp in the 20W to 120W range. Hook them up to the Cyrus ONE and you have more volume than I dared to test for more than seconds in a London apartment!

Sound quality is impressive, giving a very neutral sound but with plenty of bass. There’s no discernible distortion even at “more than 20 seconds of this and my neighbors will be calling the police” volumes. The soundstage feels wider than it ought to even with the speakers relatively close.

Wireless performance from the beefy twin-antenna setup was flawless, with no cutouts or interference.

Head-to-head against my Naim mu-so, I prefer the latter, but the difference isn’t huge, and the Cyrus setup offers massively more volume.

Cyrus One: price and conclusions

At $1,999, the Cyrus One Cast is not a budget option by most people’s standards, but as anyone familiar with the brand will know, it’s cheap by Cyrus standards. All the same, it’s a significant step up in price from the previous HD model, with Bluetooth but without AirPlay.

True audiophiles will dismiss it as a “budget” amp, and by their standards, it is. But I think most music lovers in the market for an amp at the lower end of the four-figure range will be satisfied, and it’s a beautifully elegant way to bring an older component hifi system into the streaming world.

The Cyrus One Cast is available from Amazon, priced at $1,999.

Fortnite could be getting a monthly subscription

Today Only, Anker Chargers Are Up to 35% off, Wireless or Not

You’ll soon be able to scan a QR code to contact a business on...

Print Documents (and Shipping Labels) to Your Heart’s Desire With $50 off the HP...