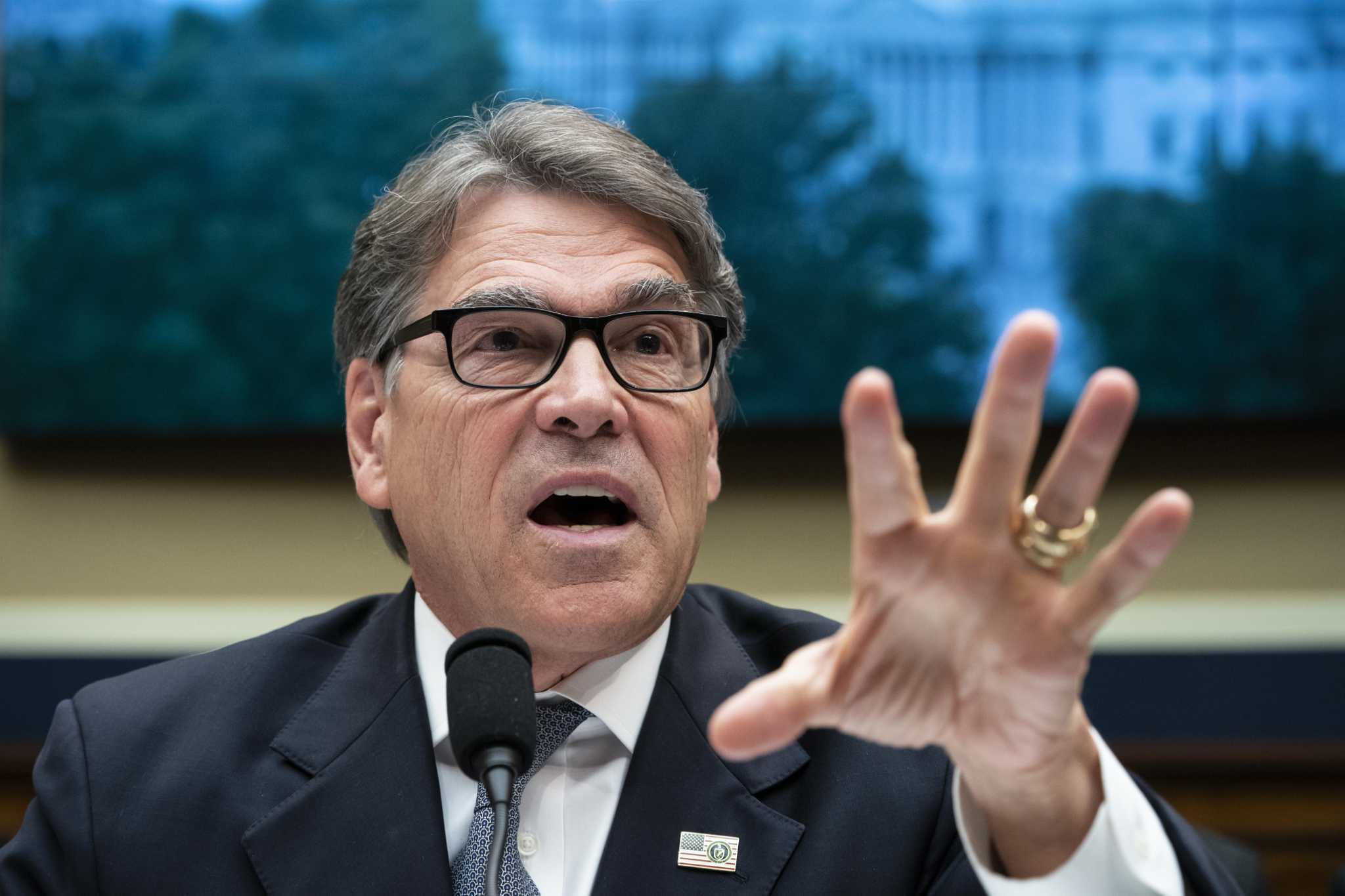 WASHINGTON – As energy secretary, Rick Perry regularly told lawmakers that he favored an all-encompassing energy policy that supported wind and solar as well as fossil fuels. But during his nearly three-year tenure, the Energy Department repeatedly hamstrung bipartisan efforts to boost spending on clean energy technology.

With President Donald Trump downplaying the need to address climate change, the Energy Department under Perry delayed clean energy grants, slow-walked hiring and left staffing levels in the nation’s clean energy programs far below what they were at the end of the Obama administration, according to government records One program went unfunded for so long that the Government Accountability Office, a watchdog agency, told the department to release the money or risk violating federal law.

These delays and shortfalls occurred even as Congress authorized significantly more spending for research and development of clean energy technologies — from advanced batteries to more efficient light bulbs. Charles Gay, who ran the Solar Technology Office before returning to the private sector as a consultant in November, described a highly politicized culture in which clean energy was simply not a priority out of concern it ran afoul of the president’s agenda.

“The cabinet secretaries have to execute on the congressional appropriations, but there are levers that are available [to slow programs],” he said. “That ends up being manifested in things like slowing the hiring of staff who are supposed to implement what Congress has told them to do. There’s been a long period of bureaucratic hurdles to that.”

That description stands in stark contrast to the cooperative image presented by Perry, the former Texas governor who left the department in December. During congressional hearings, he downplayed the president’s calls to slash the Energy Department’s renewable energy budgets and insisted he supported an, “all of the above” energy policy that encompassed both fossil fuels and renewables.

At one hearing before the House Science, Space and Technology Committee last summer, Perry said that while he respected the administration’s energy policy, he, “respects this Congress more.”

“This [budget request] is a starting point, and I recognize that,” he said. “We’re going to expend the dollars, hopefully very wisely, that Congress appropriates.”

But since Trump took office, the department’s renewable energy office has been leaving an unusually large portion of its budget unspent.

Hiring has slowed. Just over 550 staffers worked at the Office of Energy Efficiency and Renewable Energy last year, a 19 percent decline since the final year of the Obama administration.

Perry did not respond to a request for comment. Assistant Secretary Daniel Simmons conceded that staffing levels have fallen, but argued the department was not slowing spending on renewable energy and was “working very hard to make sure that money gets spent.”

“We’re trying to do our best to be good stewards of taxpayer dollars,” he said, “especially when you’re spending this amount of money.”

At the center of the controversy is an incident 18 months ago when a Trump political appointee appeared to halt funding for a solar research program out of concern it did not fit with the administration’s political messaging, according to internal documents obtained through an open records request by the advocacy group Democracy Forward.

In the spring of 2018, the Energy Department put out an announcement soliciting $46 million in grants to advance solar technology, one of dozens of such requests the office sends out each year toward developing cleaner and more efficient sources of energy.

Three months later the administration appointed Cathy Tripodi, a business consultant whose previous job was at the North Carolina Department of Transportation, to lead the office. When Tripodi saw the announcement, she complained in an email to staff that she “did not understand it.”

She ordered staff to pull back the request and rewrite it to focus on how the technology might help protect the power grid against cyberattack and blackouts, “consistent with [the president’s] mission.”

Gay, who joined the department in 2016 after decades in the solar industry, said the office was on the verge of announcing their selections when Tripodi intervened. The rewrite delayed getting the funding out by almost a year.

“I don’t have a clue why she did it,” Gay said. “This slows down the adoption of solar, which is what I’ve lived my life to do. Every delay delays us in getting on with what we need to do to, addressing the issue of climate.”

Jim Brodrick, who managed DOE’s lighting program until he retired in 2018, described similar delays in getting funding out to develop more efficient light bulbs.

“It always seemed to be they wanted to wait,” he said of the Trump administration. “Under Obama, it went more like a clock. They were in favor of building efficiency.”

The delays have become a point of contention on Capitol Hill, with not only Democrats, but also some Republicans asking whether the administration is slow walking funding in line with its repeated calls to slash budgets for clean energy.

In late 2017, the Government Accountability Office told Congress that the Department of Energy had withheld $91 million in Advanced Research Projects Agency-Energy funding, anticipating that Congress would approve the program’s elimination, as described in Trump’s budget proposal. Modeled after the military research agency that helped develop an early version of the internet, ARPA-E is charged with seeking out next generation technology to advance clean energy.

“We conclude that this withholding violated the Impoundment Control Act,” the GAO report said. The law, passed during the Watergate era, requires the executive branch to spend the money Congress appropriates to its various agencies.

At a hearing before the Senate Energy and Natural Resources Committee last month, Chairwoman Lisa Murkowski, R-Alaska, asked Energy Secretary Dan Brouillette to provide a “detailed review” of how the department was spending grant money through ARPA-E.

“We have the ultimate authority on appropriations,” Sen. Angus King, a Maine independent, told Brouillette during the hearing. “I don’t think this is faithfully being executed when a substantial portion is held back and then is attempted to be clawed back in the following year’s budget.”

Part of the issue is the shrinking staff to do the work of deciding how best to spend clean energy funding.

At a hearing before the House Science Committee last month, Simmons told Democrats “staffing is a harder challenge than I thought a year ago.” He explained that hiring took at least three months because of the numerous federal protocols involved.

But Arjun Krishnaswami, a policy analyst at the Natural Resources Defense Council, questioned whether the slowdown was a political decision. He noted that the same protocols were in place during the Obama administration, which managed to fill jobs and keep the agency fully staffed.

“It’s not there’s not a lot of qualified applications. There’s some hold up in the administration,” Krishnaswami said. “Now each staff member is responsible for sending significantly more money out the door, so it’s more challenging for EERE to spend its money on time. And when they do do it, they have less staff to figure out what are the most promising opportunities.”

While clean energy has gained bipartisan support, some conservatives, especially those from oil-rich states such as Texas, are praising the Trump administration’s handling of a federal funding stream they believe has grown too large. At the House hearing earlier this year, Rep. Randy Weber, R-Beaumont, said the clean energy program amounted to a “blank check tied to a poorly defined list of priorities.”

“Can you say Solyndra,” he said, referring to the failed solar manufacturing facility funded by the Department of Energy under Obama. “After increases by the Obama administration, EERE is by far (the Energy Department’s) largest applied research program.”

Trump appears to share that point of view. At a rally in Florida in December, Trump railed against wind turbines, saying, “I never understood wind. You know, I know windmills very much. They’re noisy. They kill the birds.”

Asked whether it was difficult to lead research into new technologies against which the president regularly rails, Simmons said in an interview that it did not affect him or his staff.

Learn how to scale social impact startups at Disrupt with Phaedra Ellis-Lamkins and Jessica...