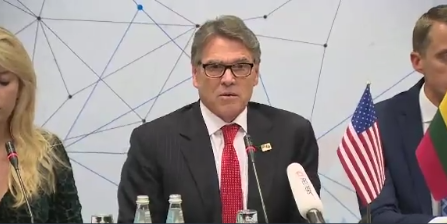 FORMER ENERGY SECRETARY RICK PERRY REJOINS THE PRIVATE SECTOR FRIDAY, ON THE BOARD OF PIPELINE COMPANY, A PREVIOUS EMPLOYER

Perry was appointed as the director of LEGP LLC., which is the general partner of Energy Transfer Friday.

That’s the company where Perry sat on the board until he resigned to be energy secretary in 2016.

Energy Transfer is known for building pipelines, including the controversial Dakota access pipeline.

That pipeline has been the subject of heavy protests by Native American and environmental groups.

Perry was replaced by Dan Brouillette as energy secretary in December.

However, his dealings with Ukraine faced scrutiny during the House’s impeachment inquiry into the president.

Perry also served as governor of Texas and ran unsuccessfully for the Republican nomination for president in 2012 and 2016.

In the SEC filing for his new private sector job, Perry would be eligible for cash compensation.