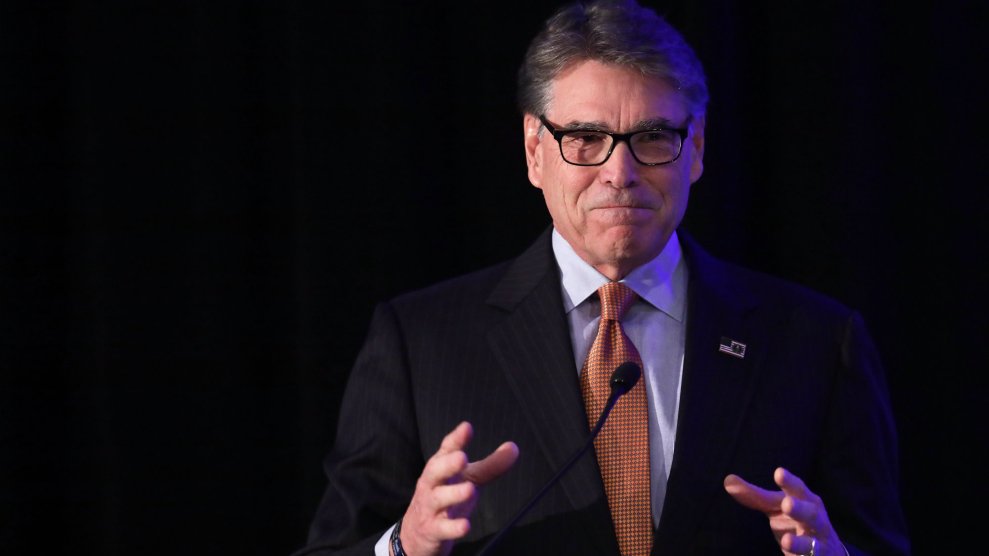 For indispensable reporting on the coronavirus crisis and more, subscribe to Mother Jones’ newsletters.

Department of Energy Secretary Rick Perry is leaving the Trump administration. After nearly three years in the role, Perry is exiting just as the Ukraine scandal is heating up. In October, Perry announced that he’d be leaving his post—his last day is scheduled for Sunday.

There are many questions surrounding Perry’s involvement in the Ukraine scandal involving President Donald Trump trying to get Ukrainian President Volodymyr Zelensky to investigate Democratic candidate Joe Biden in exchange for foreign aid. The alleged quid pro quo led to the US House launching an impeachment inquiry. After Perry attended President Zelensky’s inauguration in May, two political supporters of Perry received lucrative oil and gas exploration contracts from the Ukrainian government. During that trip, the energy secretary gave President Zelensky a list of people who should be awarded the contract; the list of names included a Perry backer.

Up until the Ukraine scandal broke, Perry managed, somehow, to be one of the least controversial members of the Trump cabinet.

Granted, he recently said that Donald Trump was chosen by God to be president, but he also believed Barack Obama became president because of divine intervention as well.

It’s unclear how the Perry’s involvement in Ukraine will play out during the impeachment process, but US Ambassador Gordon Sondland testified earlier this month that the energy secretary knew about the quid pro quo, so Perry has even more incentive to find an excuse to get out of Washington.

Why “2021 will be the year of mobile esports” according to Ryu Games’ Nick...