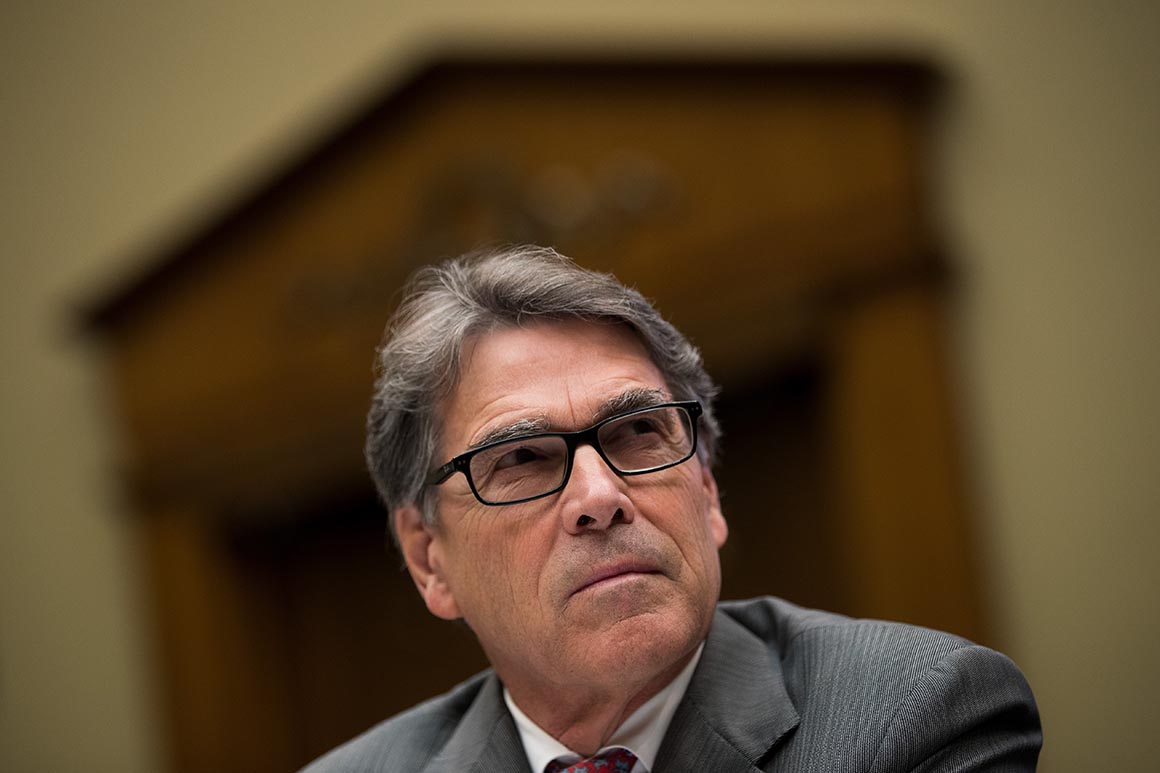 Perry has said only that he would follow the recommendations of the Energy Department and the White House counsel in deciding whether to comply with the Democrats’ subpoena. But he may cooperate as a way to salvage his reputation before he departs, people who know him told POLITICO. He might have even more of an impetus after Trump last week blamed Perry for pushing him to make the phone call to Ukraine’s president that provoked the impeachment inquiry, said one person from the energy industry who is close to the administration.

“For the most part, he has a lot to lose by getting embroiled in this and he’s not going to want to hide things,” said the person, who spoke on condition of anonymity to preserve relationships with administration officials. “He’s going to want to extract himself as cleanly as he can from this snare.”

Perry has maintained that he never heard the Bidens’ names come up in discussions of Ukrainian corruption. But he is one of three officials who have led Trump’s outreach to Ukraine since last spring — along with State Department envoy Kurt Volker and Gordon Sondland, the U.S. ambassador to the European Union, who dubbed the group the “three amigos.” Some witnesses testifying behind closed doors to the House have said Perry was present during or just before conversations in the White House turned to the president’s interest in seeing the Ukrainians investigate Democrats, according to accounts in multiple news outlets.

White House chief of staff Mick Mulvaney told reporters that the administration had in fact expected a quid pro quo with the Ukrainian government, in which Trump would release military aid to the country in exchange for it looking into allegations of 2016 election fraud.

Last week, Trump said Perry had pressed him to make his now-controversial July 25 telephone call to Ukrainian President Volodymyr Zelensky. Perry appeared to hit back this week, telling The Wall Street Journal that Trump had directed him to consult with the president’s personal attorney, former New York Mayor Rudy Giuliani, about Ukraine.

Giuliani has repeatedly pushed unsubstantiated allegations against Democrats — including accusations that Hunter Biden was guilty of corruption for his role on the board of a Ukrainian gas company, or that Ukraine’s government had fabricated evidence about Trump and his associates during the 2016 election.

“I don’t know whether that was crap or what,” Perry told the Journal, regarding the latter claim.

Trump’s account of Perry pressing him to make the phone call sounded odd to some politically experienced people close to Perry.

“I don’t know of a president who would say that somebody made them do something. I find it hard to believe that a president can be made to say or do anything,” said Joe Allbaugh, a longtime Perry friend who served as gubernatorial chief of staff, presidential campaign manager and FEMA director for George W. Bush. “I just don’t understand it. It’s the most powerful position in the world.”

Now, more than a half-dozen Democratic lawmakers have voiced interest in hearing from Perry directly, including Rep. Joaquín Castro (D-Texas), a member of the Intelligence Committee, who told reporters: “Rick Perry needs to testify.”

Besides questions about his interactions with Giuliani, lawmakers are also interested in Perry’s effort to place Houston oil and gas executives — including one who had donated to his Texas political campaigns — on the advisory board of Ukraine’s state-owned oil and gas company, Naftogaz.

The latest news in energy and environmental politics and policy.

Rep. Gerry Connolly (D-Va.), a senior member of two of the committees leading the inquiry, said he wants to see Perry testify as part of the inquiry.

“He’s a material witness,” Connolly said Wednesday. “He was one of the ‘three amigos.’”

“There’s no one, including Secretary Perry, who’s above the law,” Rep. Bobby Rush (D-Ill.), who chairs the Energy and Commerce subcommittee overseeing DOE, told POLITICO. “There’s no other way. He has to honor that.”

Despite Perry’s insistence that he never mentioned the Bidens to Ukraine officials in his entreaties that they fight “corruption” or heard others bring up the Democratic presidential candidate or his family, NBC News reported that Perry was seen leaving a White House meeting as former State Department official Fiona Hill heard participants discussing Burisma, a Ukrainian natural gas company that had paid Hunter Biden $50,000 a month. Hill went to that meeting on the orders of her former boss, John Bolton, who broke up a separate meeting because of his objections to Giuliani’s involvement, The New York Times reported this week.

Up to now, Perry has been in lockstep with the president, even though he had assailed Trump as a “cancer on conservatism” during their brief time as GOP presidential rivals in 2015.

As secretary, Perry has led an ill-fated effort to pressure federal energy regulators to offer a financial lifeline to coal-fired power plants, an effort that would benefit coal magnates who were major Trump campaign contributors. And he has been the administration’s energy pitchman overseas, touting U.S. exports of oil, natural gas and coal as well as a controversial nuclear power technology arrangement with Saudi Arabia.

Rumor Has It That a MacBook Pro and MacBook Air Will Be the First...

Off-Roading Simulation Game ‘MudRunner Mobile’ Is Out Now on iOS and Android as a...