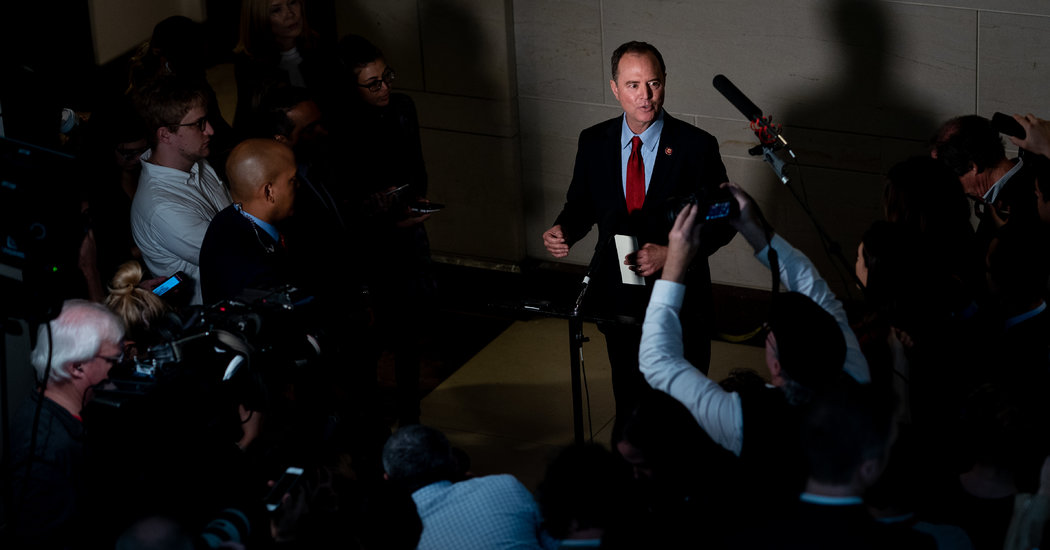 WASHINGTON — House investigators pounded the Trump administration and its allies on Thursday with new subpoenas, demanding documents from Rick Perry, the energy secretary, and testimony from two more witnesses as they aggressively challenged a White House pledge to starve their impeachment inquiry of evidence.

Three Democratic chairmen leading the inquiry instructed Mr. Perry to turn over by next Friday any records that would shed light on President Trump’s attempts to pressure the Ukrainian government to open corruption investigations into former Vice President Joseph R. Biden Jr. and his son. Investigators also want answers on whether Mr. Perry tried to influence the management of Ukraine’s state-owned gas company.

Hours earlier, they demanded that two businessmen, Lev Parnas and Igor Fruman, appear for depositions next Wednesday and hand over records related to their work with Rudolph W. Giuliani, Mr. Trump’s personal lawyer. Mr. Giuliani has been the point man in the president’s pressure campaign on Ukraine, around which the inquiry is centered. The subpoenas came shortly after the two men were indicted on federal campaign finance charges that touched on their work in Ukraine.

The new subpoenas, and more in the works, sent a clear message to the White House that Democrats do not intend to back down from a growing constitutional clash over their inquiry, even after the White House defiantly said this week that it would stonewall all requests for witnesses and documents.

Rather than waiting out the prolonged negotiations with witnesses that are typical in congressional oversight investigations, Democrats are demanding compliance on tight deadlines and threatening to draft an article of impeachment charging Mr. Trump with obstruction of Congress if his administration does not oblige.

“They may not evade requests from Congress for documents and information necessary to conduct our inquiry,” the chairmen wrote. “They are not exempted from this requirement merely because they happen to work with Mr. Giuliani, and they may not defy congressional subpoenas merely because President Trump has chosen the path of denial, defiance and obstruction.”

Still, significant questions remained open about which witnesses the House could secure.

Lawyers for the C.I.A. whistle-blower whose complaint about Mr. Trump’s dealings with Ukraine prompted the inquiry appeared to be backtracking on earlier expectations that he would sit for an interview with members of Congress. Instead, they proposed a written question-and-answer exchange with the House Intelligence Committee, according to a person familiar with the matter.

And lawmakers awaited word from the State Department on whether it would try to block an interview scheduled for Friday with Marie L. Yovanovitch, the former American ambassador to Ukraine whom Mr. Trump removed after some of his allies concluded that she was impeding efforts to pressure the Ukrainians into opening investigations on Mr. Biden and other Democrats.

The latest subpoenas emerged as criticism of the president’s actions in the Ukraine matter continued to grow and his defense team appeared to face a setback. Asked whether it was proper for the president to solicit foreign interference in the political process, H.R. McMaster, Mr. Trump’s former national security adviser, responded, “Of course it’s not appropriate.”

Speaking at an event in Washington on Thursday, Mr. McMaster said it was up to Congress “to make a judgment as to whether or not that happened.”

At the White House, Mr. Trump questioned why lawmakers would want to talk to Mr. Perry. But he had told Republican lawmakers last week that Mr. Perry had encouraged him to make a much-scrutinized July phone call to President Volodymyr Zelensky of Ukraine in which Mr. Trump pressured him to investigate political rivals, according to Axios.

“How many people can they talk to?” Mr. Trump said on Thursday. “We had a simple conversation.”

Only a day after one of Mr. Trump’s lawyers announced that Trey Gowdy, a former Republican congressman from South Carolina, would join his private legal team to fight the House inquiry, the president told reporters that Mr. Gowdy actually could not start representing him until January, because of “lobbying rules.”

Democrats are eyeing an accelerated timetable for their impeachment inquiry that could mean the entire process — including a House vote to charge the president and a Senate trial — could be almost over by January.

With the White House struggling to calibrate its response, Democrats have moved quickly to paper Mr. Trump’s government with requests for information. The subpoena for Mr. Perry follows similar ones sent to the Defense and State Departments, the Office of Management and Budget, Vice President Mike Pence and the White House itself.

House investigators believe Mr. Perry may know about crucial exchanges between the United States and Ukraine in recent months. He led an American delegation to Mr. Zelensky’s inauguration in May, and news reports have suggested he was aware of Mr. Giuliani’s unusual role in shaping United States-Ukraine relations and may have been employed in Mr. Trump’s pressure campaign.

“Recently, public reports have raised questions about any role you may have played in conveying or reinforcing the president’s stark message to the Ukrainian president,” the chairmen wrote.

Mr. Perry had previously indicated that he would work to answer the House’s questions, but the White House’s “full halt” on cooperation, as the White House counsel put it in a letter sent to Speaker Nancy Pelosi on Tuesday, is likely to complicate that.

Mr. Parnas had been scheduled to appear for a deposition on Capitol Hill on Thursday and Mr. Fruman on Friday. But even before their arrests, their lawyer, John M. Dowd, had indicated that they would not comply voluntarily.

The subpoenas issued by the House Intelligence Committee to Mr. Parnas and Mr. Fruman make no mention of the federal indictment. The F.B.I. arrested the two men as they were about to board an international flight late Wednesday, and on Thursday federal prosecutors charged them with funneling foreign money to government officials and campaigns in an effort to influence American policy, including toward Ukraine.

The indictments could complicate congressional attempts to get them to testify, raising the issue of whether lawmakers will grant them immunity that would bar the use of their testimony as criminal evidence.

At the same time, an assertion of the Fifth Amendment right against self-incrimination would be a lawful basis for the pair to avoid answering questions despite a subpoena.

The New York Times reported in May that the two men helped connect Mr. Giuliani to Ukrainian prosecutors who provided him information related to the investigations he wanted into Mr. Biden and his son Hunter, as well as a debunked conspiracy theory about Ukrainian meddling to aid Democrats in the 2016 election.

The federal indictment in Manhattan made no mention of Mr. Giuliani, but stated that the men worked with one or more Ukrainian government officials to try to secure the removal of Ms. Yovanovitch as the United States’ ambassador.

Mr. Giuliani was seeking Ms. Yovanovitch’s removal, as well, and ultimately the White House called her back to Washington early, having deemed her insufficiently loyal to the president.

Other work by Mr. Parnas and Mr. Fruman also appears to have overlapped with Mr. Perry’s interest in the Ukrainian state-owned gas company, Naftogaz, which he raised during his May visit to the country.

House investigators are scheduled to hear from Ms. Yovanovitch on Friday in a private deposition, but as of late Thursday, it remained unclear if the State Department would try to block her testimony. Democrats were prepared to issue a subpoena to increase pressure if needed.

The indictment may also significantly complicate Mr. Giuliani’s ability to serve as a face of the president’s defense. Senate Republicans allied with the president have said they might host a public hearing with Mr. Giuliani in an effort to showcase his accusations against the Bidens and undercut the House’s impeachment narrative. Now they may decide he is too toxic to expose to public questioning.

SwitchArcade Round-Up: Mini-Views Featuring ‘Prinny 1-2’, Plus ‘The Coma: Recut’ and Today’s Other New...