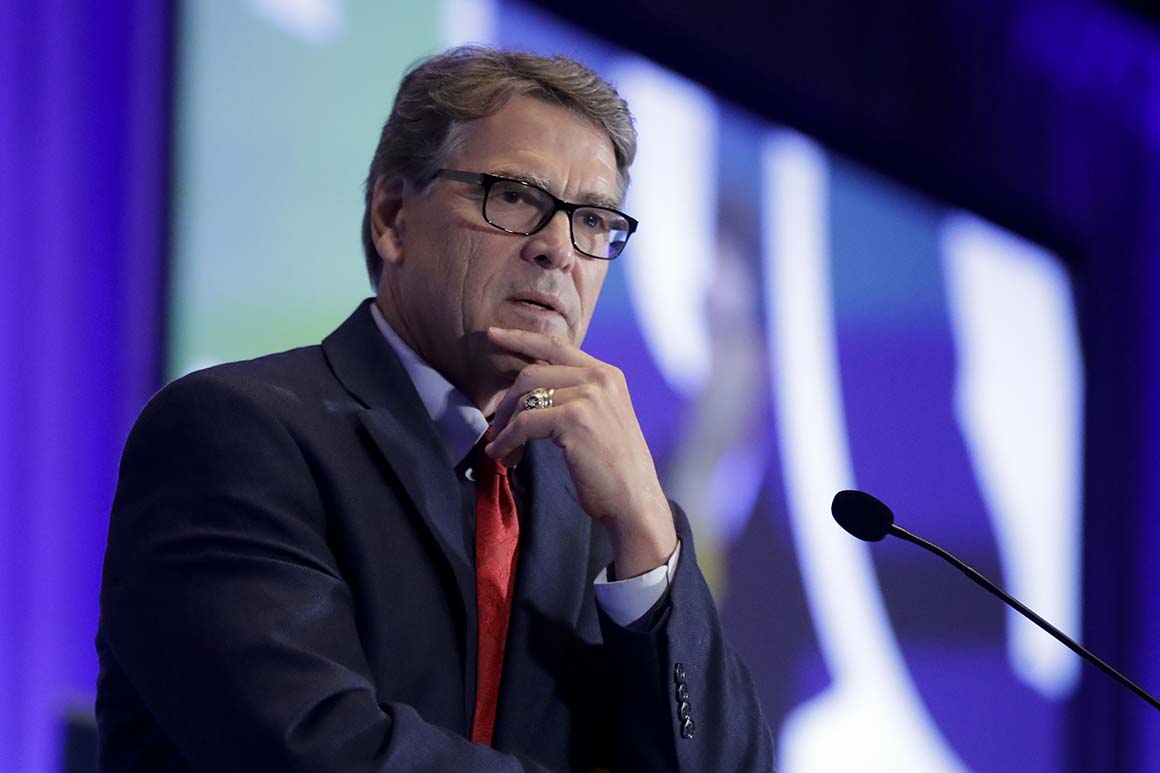 The redacted whistleblower complaint that the White House released last week mentioned Perry’s attendance at the inauguration of Ukrainian President Volodymyr Zelensky, saying he led the U.S. delegation there in May after Trump told Pence not to go. The whistleblower added that U.S. officials had “made clear” that Trump himself would not meet with Zelensky until he saw how the Ukrainian leader “chose to act.”

Perry also figures into a subpoena that House Democrats sent on Monday to Trump’s private attorney Rudy Giuliani, including a demand for records of the secretary’s trip to Zelensky’s inauguration and any communications the Energy Department may have had regarding two phone conversations between the Ukrainian leader and Trump.

In his letter Tuesday, Menendez asked Perry for information about who asked him to attend the inauguration, whether he knew Pence’s trip to the event had been canceled, and whether he passed along Trump’s desire for help investigating political opponents.

A daily play-by-play of congressional news in your inbox.

Rep. Jamie Raskin of Maryland, a Democrat on the Judiciary and Oversight committees, told POLITICO he thought it likely Perry would eventually be called to testify, though he is not aware of any committees ready to seek his testimony yet.

“His Ukraine-related activities have drawn the interest of members and he almost certainly has relevant testimony to offer,” Raskin said. “He seems to have appeared and reappeared multiple times in the Ukrainian context, so he’s likely to have evidence that Congress would consider material.”

DOE did not respond to a request for comment.

Perry has not been a target of any Democratic subpoenas, and it’s unclear whether he will be a key focus of lawmakers in the impeachment probe. But the questions call new attention to Perry’s record of performing discreet diplomacy for the White House.

The former Texas governor has been a regular visitor to Saudi Arabia, where he traveled in 2017 to persuade the Kingdom to partner with the U.S. rather than Russia or China to develop two nuclear reactors. That effort came as the Trump administration continued to seek close ties with the Saudis, despite intelligence linking them to the death of dissident and Washington Post columnist Jamal Khashoggi last October.

Perry has also been an aggressive advocate for U.S. energy companies to sell their natural gas to Eastern Europe, in an effort to counter Russia’s grip on the continent’s fuel supplies, and he helped craft a deal that sent U.S. coal to Ukraine. He has visited Ukraine multiple times, and tweeted out a photo of his most recent meeting with Zelensky last month.

This kind of international diplomacy is somewhat out of the norm for most energy secretaries, whose main duties include overseeing maintenance of nuclear weapons and funding scientific research. But it’s not entirely unprecedented — former Secretary Ernest Moniz’s expertise in physics made him a crucial part of the Obama administration’s negotiations for its nuclear deal with Iran.

Perry has mainly avoided the negative headlines that have plagued others in Trump’s Cabinet, including the scandals that ousted former Interior Secretary Ryan Zinke and former Environmental Protection Agency chief Scott Pruitt. But Democrats should at least bring him in for questioning about his activities involving Ukraine, the leader of one government watchdog group said Tuesday.

“It’s possible there’s nothing here but it’s also possible that Rick Perry participated in, knowingly or unknowingly, a pressure campaign to have Ukraine investigate the president’s domestic political opponents,” Austin Evers, executive director of American Oversight, told POLITICO. “If I were Rick Perry or anyone else in the administration, I’d be very careful about being honest right now.”

In an interview with a Ukrainian broadcaster in July, U.S. Ambassador to the European Union Gordon Sondland described himself, Perry and the recently departed special envoy for Ukraine, Kurt Volker, as the “three amigos” on Ukrainian issues.

“We’ve been tasked with sort of overseeing the Ukraine — U.S. relationship,” Sondland said, in order to “make sure that all of the reforms and all of the initiatives that we are undertaking with Ukraine stay on track and happen quickly.”

Another administration energy official told POLITICO that the push to open up overseas markets for U.S. fuel supplies was a natural fit for Perry, whose home state has been at the forefront of the shale energy revolution that has turned the U.S. into the world’s top oil and gas producer.

“He’s been on the front lines from soups to nuts,” said Frank Fannon, the assistant secretary of state for energy resources. “He is a powerful voice and indeed a kind of ambassador in some respects.”

Perry, who derided Trump in 2015 as “a cancer on conservatism” who offered nothing but “a barking carnival act,” has surprised some political watchers by his ability to thrive in the administration. The job has even given Perry an opening to put his salesmanship skills to use.

“Eastern Europe is something that he’s taken up as his international issue,” said a lobbyist familiar with Perry’s work in Ukraine. “It happened after the coal deal [with Ukraine]. He did not come into DOE with this sort of objective. But after the coal deal, he saw this as something positive he could do.”

Perry was instrumental in helping to strike a deal for U.S. companies to export liquefied natural gas to Poland, and he has regularly railed against the Nord Stream 2 pipeline that would increase Russian gas exports to Germany. Russia currently supplies Europe with more than a third of its natural gas.

“Perry really loves energy policy and he knows a lot about energy issues coming out of Texas,” Banks said. “It’s a combination of that as the administration begins. Perry is just in a position to engage at a really high level on energy diplomacy in general.”

Eric Wolff contributed to this report.

Photography backup service ‘Ever’ will never work again due to iCloud and Google Photos...

‘World’s End Club’ Featuring the Creators Of ‘Zero Escape’ and ‘Danganronpa’ Is This Week’s...