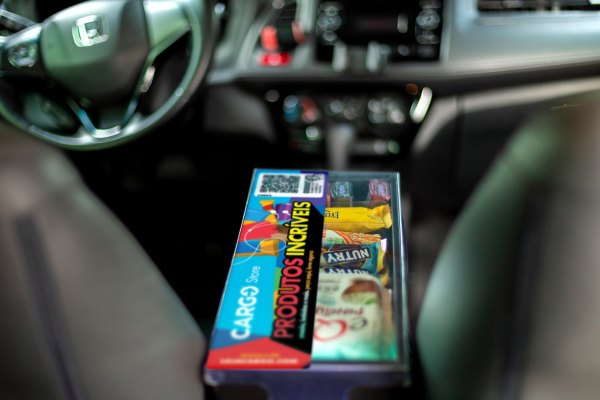 Cargo, the startup that brings the convenience store into ride-hailing vehicles, is making its first international expansion through an exclusive partnership with Uber in Brazil.

Uber drivers in São Paulo and Rio de Janeiro will now be able to sign up for Cargo and potentially earn additional income by selling products to passengers during their ride.

Cargo, which launched in 2017, provides qualified ridesharing drivers with free boxes filled with the kinds of goods you might find in a convenience store, including snacks and phone chargers. Riders can use Cargo’s mobile web menu on their smartphones (without downloading an app) to buy what they need.

The expansion into Brazil includes a relationship with am/pm convenience stores. In Brazil, about 2,500 am/pm stores are operated and located in Ipiranga gas stations. Uber drivers that sign up with Cargo will collect their boxes of products at these stores.

The announcement is an extension of a partnership with Uber that began last July in San Francisco and Los Angeles. Cargo and Uber have added more U.S. cities to the partnership, including Boston, Miami, New York and Washington, D.C.

The move will give Cargo access to the more than 600,000 Uber drivers in Brazil. It also signals the beginning of what will be a broader global expansion for the company. Some 20,000 U.S. drivers have used the Cargo service.

To date, Cargo has raised $30 million in venture funding.

ThatGameCompany has Raised 1 Million Dollars for Doctors Without Borders

The Influencers Are Lobbying Washington, but What Do They Want?

Contrary Capital wants to invest in the next big tech mafia