With the launch of Apple Arcade, the number of great games to play on iPhone and iPad has increased dramatically. And the vast majority of Apple Arcade titles work best with a gamepad connected. The Rotor Riot is probably the best third-party option for an on-the-go MFi game controller.

You can get the Rotor Riot from Amazon, or from the Apple Store.

First and foremost, the gamepad is well made. It features a soft-touch plastic exterior, which feels nice to hold and keeps the controller light.

The primary input buttons are satisfying to press and the analog sticks are nimble. Interestingly, the sticks are clickable, something not found on other MFi controllers. It’s a welcome addition but the ecosystem isn’t quite there: most App Store games don’t offer action bindings for the L3/R3 buttons.

The D-Pad lets it down slightly. Rotor uses a circular design that you press to tilt into each corner for top-left-down-right inputs. To me, this feels a bit mushy and imprecise. I would have preferred a more classic ‘plus’ layout, like what you find on PlayStation and Xbox controllers.

The leading MFi controller on the market, the SteelSeries Nimbus, pairs over Bluetooth. But the Rotor uses a wired Lightning cable which trails out from the backside of the unit.

Because the controller uses a wired connection, there is essentially zero latency. You press a button or hit a trigger on the controller and the game immediately responds. If you are playing high-action games like a mobile FPS, this can be important. You also don’t have to worry about charging the controller as it just feeds off the battery of the iPhone or the iPad it is plugged into. (There’s an additional passthrough port on the controller if you want to play and charge simultaneously.) 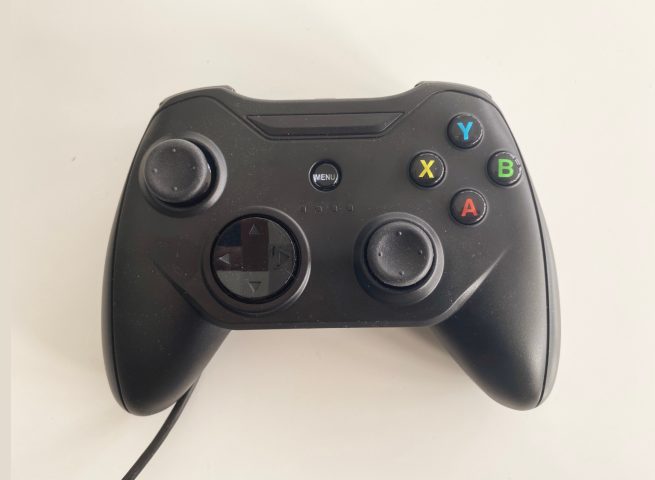 However, being wired also has its downsides. The Lightning connection wipes out any compatibility with macOS or Apple TV. You just can’t use it there. It feels somewhat wasteful to buy a controller that is only compatible with just your iPhone and your iPad. You also have the practical inconveniences of having a wire stick out the controller. If you connect to an iPad, you can only do so at relatively short range. You are limited by the length of the cord. The Rotor controller is really designed to be used on-the-go with the phone positioned in the included holster.

The angle of the holster helps the unit not feel too heavy. Rotor call it the ‘zero-g holder’ I wouldn’t go that far, but I was genuinely surprised that the combination of iPhone 11 and gamepad did not feel unwieldy, even for an extended session.

This is a great configuration if you want to play some games whilst in an aeroplane, or commuting on a train. The phone is positioned at just the right angle for you to look at the screen comfortably with the controller resting in your lap. When you are at home, it would be fine to play on the sofa too … but it feels like a waste not to use that big screen TV to play. And the wired connection makes that impossible.

The space for MFi game controllers has shifted a lot since iOS 13 and tvOS 13 added in-built support for PlayStation DualShock and Xbox Wireless controllers. Many iOS users simply won’t need to buy a controller at all anymore because they’ll have one already. But the Rotor Riot has a market because of its design choices: no-hassle on-the-go gaming.

I’m just not sure how many people want to invest the money just for that experience. In a perfect world, the controller would be dual-purpose, sporting both Bluetooth and Lightning, to make it compatible with Apple’s entire product lineup.

Making the Grade: What will Apple Silicon mean for Apple’s education strategy?

‘Creatures of Aether’, the PvP Card Battler in the ‘Rivals of Aether’ Universe Is...

Hollywood’s ‘New Normal’ Could Be Leaving U.S. Workers and Older Actors in the Dust