Digital games revenue had its second-best month with $10.46 billion in June 2020, according to SuperData.

Overall, there was a revenue increase of nine per cent year-on-year and a three per cent rise over earnings in May. However, both PC and console have seen a loss, although mobile has offset this through hitting an all-time high in revenue growth.

The top-grossing mobile title last month was Tencent’s Peacekeeper Elite – better known as Game for Peace – the Chinese localised version of PUBG Mobile. However, the Western version sits at No.10. Earlier this month, the battle royale exceeded $3 billion in lifetime revenue. 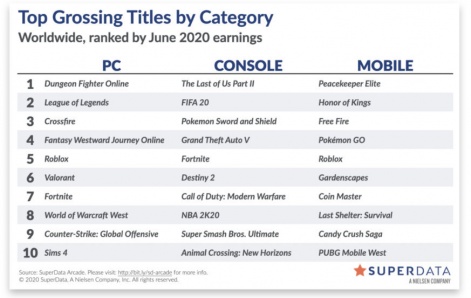 Last month, Pokemon Sword and Shield saw its highest monthly digital revenue since launch with the release of the first DLC in the series, The Isle of Armor. Overall, the RPG came in at No.3 on the console chart.

Within its first week of release, Pokemon Sword and Shield had sold six million copies across physical and digital combined. Furthermore, in just three days, the games had moved 1.3 million units in Japan alone.

Concept shows how Apple could enhance the widget experience on iPadOS

Player registration for games in China: how to comply and keep your title alive

India Engages in a National Initiative to Support Its AI Industry