Tech News Extra
Home Uncategorized This Week in China: Taptap shows off its next games as Tencent...

It can be difficult to get the latest news from China, given how locked off it can be for the rest of the world, but we’re making it a little bit easier with our weekly round-up of the biggest stories from the region.

We’re working with Junxue Li, CEO of Beijing-based 2D art firm Sunny Painter, to bring the most interesting news from China to you, so you can stay informed of what’s happening in one of the biggest markets in the world.

This week, we’re looking at Taptap’s gaming showcase, and the resolution of Tencent and Laoganma’s strange fraud case…

On July 10th, leading Chinese mobile game finder platform Taptap hosted an online press conference, which brought together updates of 17 titles from game giants such as X.D Network, Tencent, Giant Network, Mihoyo, and Coconut Island. In this report, let us look into a few highlighted games.

The mobile version of the famous sandbox game will be published by X.D Network (owner of Taptap) in China this fall. The friend list from Taptap is integrated into the game, so players can invite & play with Taptap friends. X.D told us that to ensure the best gaming experience, the game will go with a pay for once price of ￥30.

The action puzzle game will also be published by X.D Network in China and it will hit the market in 2020 Q3. A lot of optimizations have been applied to this mobile version to give better input control. Gamers can also connect with Taptap’s friend list.

X.D Network will localize and publish the mobile version of two Professor Layton games in China: the Curious Village and the Diabolical Box.

X.D reveals this is a thorough localization – for, example some puzzles in the original games are centered on Japanese kana, and these have been replaced by newly designed puzzles to make sense to Chinese players. The games will also be upgraded to HD graphics. The first game will be launched this winter, and pre-registration of the second game is open now.

A mobile version of the famous hack & slash 3rd person shooter will be published by Yunchang Game in China this winter. From the video unveiled, we can see it’s a mix of many DMC titles, instead of being an original game.

As reported by PG.biz, it’s an open world mobile action game published by MiHoYo, and its CEO Liu Wei made his presence in the press conference. He introduced two of the total of seven main cites in the game, one in a European style and another in a Chinese style.

The accessible area is around 20-30 square kilometers, with foes, mini-games, and dungeons dotting the space. The game will be launched in 2020 Q3.

This is a Dark Souls-like game developed by Giant Network, it’s already on sale and it will have new DLC this summer.

This is a relaxing simulation game developed by Shanghai based Inutan Studio. At the beginning of the story, the dark lord who had devastated the world has already been defeated. Without the urge to save the world, the young girls in a magic academy are now living a leisurely life. The players can pass their time by gathering stuff, tilling the fields, fishing, or set out for adventures which are not dangerous.

Due to cultural differences, few western Match-3 games are doing well in China, and Gardenscapes is a rare one among them, due to the diligent localization work. Now to further the endeavor, starting from July 15, Gardenscapes is working with the Forbidden City to initiate a year-long interactive campaign.

On the day, a new version was launched with part of the imperial garden inside of the Forbidden City recreated in the game, which players can maintain and live inside of it. And adding up to the promotional efforts, a new “Forbidden Cityscapes” music video starring pop singer Duan Aojuan was released.

For this collaboration, Gardenscapes is ploughing deep into the Chinese culture, while the ancient Forbidden City is trying a new way to present itself.

They released a joint statement, with the below points covered: Tencent withdrew the suit, and made apologies to Laoganma, saying both sides would explore how to push forward formal cooperation; the two expressed their gratitude to Guizhou police for their efforts; lastly, both companies wished the public would accept their apologies, for this case had wasted up so much information traffic.

And Tencent joked in its social media entry, “This time the stamps are real.” 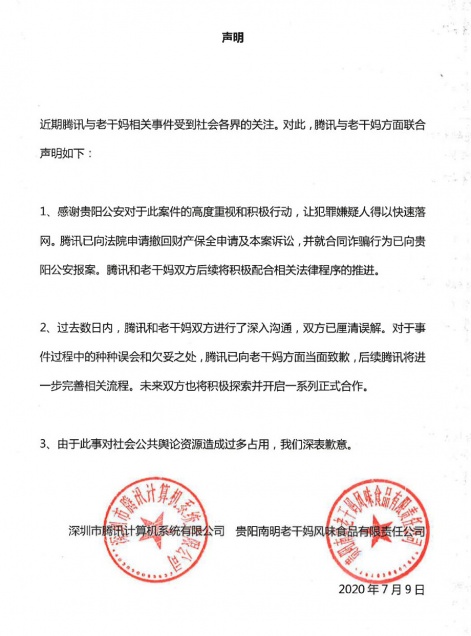 On July 8th, Chinese developers received a mail from Apple, the content is as below.

All paid games or games with microtransaction must submit license before the deadline, otherwise they would be removed from the App Store. Before this, there were rumors regarding the timing and Apple’s resolution, and now Apple has officially made its attitude clear.

Currently in the Chinese top 50 paid chart, 28 games are without licenses, including 7 self-published games. Undoubtedly the impending action of Apple will profoundly change the Chinese market. 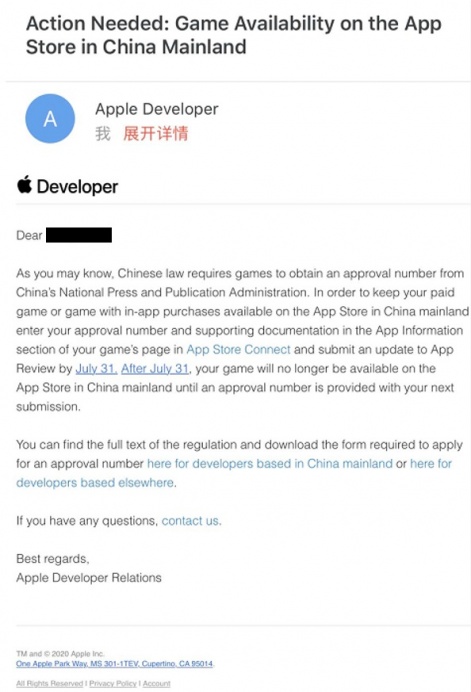 Grab Mario Kart 8 Deluxe for $50 and Be Ready For Your Next Game...