The process in creating a game is a difficult, long and often stressful process, but it’s one that can reap many awards alongside actually seeing your ideas come to life.

No matter the size of the game or how long it ultimately took to make, each new title involves a lot of hard work, hard decisions, and a little bit of luck before it even gets out the door and onto devices. And in the current mobile market, that’s only the first step in having a successful game.

To highlight all of the hard work that often goes on unseen in the background, PocketGamer.biz is reaching out to developers to learn more about the general rigmarole of releasing a video game, with our ‘Making Of‘ series.

This week we spoke with Evil Empire CEO Steve Filby regarding the development and launch of Dead Cells on mobile.

PocketGamer.biz: Can you start off by telling us about Dead Cells?

Steve Filby: Dead Cells is a ‘RogueVania’ game, which is some sillyness we cooked up to describe what happens when you try and merge a Metroidvania-style 2D action-adventure game into a rogue-lite core game loop.

Or in English, it’s a game where you progress through levels trying to beat the game in one go. If you die you lose almost everything and have to start again, with all of the levels being slightly different to your previous try. Sounds fun right?

Overall, we’ve got great reviews and it’s sold well for an expensive premium title on mobile.

What platforms can people find Dead Cells on?

You can play the game on iOS, Android, PC (Steam, GoG, Origin, Windows 10 Store), Nintendo Switch, PlayStation 4, and Xbox One. So pretty much everywhere except your smart fridge.

Where did the initial idea for the game come from?

It was really supposed to be a spiritual successor to one of our more successful web games Hordes. Hordes was this browser game that you played in real-time with 40 people all thrown together and tasked to defend a town against a zombie attack that happened at midnight every night.

Dead Cells was actually called Hordes Zero, and was supposed to be a kind of free-to-play, multiplayer, tower defence, co-opetition game. However, that idea actually turned out to be rubbish, so we killed it several times and ended up with a side-scrolling action-adventure roguelite.

Anyway, that’s where the turrets in the game originated from. Initially, you used to lay turrets along the “path” of the zombies, but we decided to keep them when we changed the game design.

How long did development take, and how many people worked on the game?

It depends on how you count. If you count all the time we spent fluffing around on Hordes Zero, then it took us ages. If you count from the moment that we started working on the actual Dead Cells game in the form it takes today, about 18 months until early access, then another 15 months in early access before the 1.0 release. 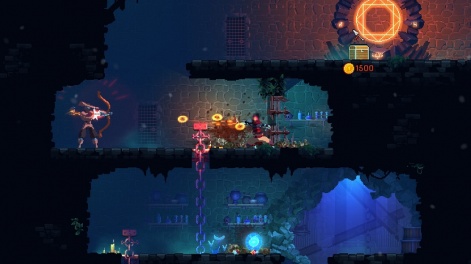 Adding in the Hordes Zero epoch would probably add another year and a half. As for headcount, the game started with just two people working on it and scaled up slowly. At the peak, there were 12 people working on the game.

What was the biggest challenge you had to overcome during development?

Letting go of our habits and ways of thinking from our time as web developers. It took us a long time to accept that we were no longer making a web free-to-play game.

Once we finally took ownership of the idea that we no longer wanted to make that type of game, and that we wanted to go for broke on PC and console, things suddenly became a lot easier.

At what stage in development did you feel you had a game that you were happy with?

Probably not until EGX 2016. We quietly showed off the very first (and only) level to the attendees of the show and we started having people coming back after testing the demo, offering us beers as bribes to kick people off the computer and to let them play again. We started to think that we were on to something at that stage.

Has the Covid-19 pandemic impacted development in any way?

I’d say that we’ve got a few years left in the game as far as updates go, given how it’s selling.

Yes and no. We were all working from home during the lockdown, and we’re now just starting to get back to having everyone in the office. But being at home didn’t really change how we work. We still sit at a desk and use our computers, it’s just that instead of getting up and making 30 coffees a day while chatting with colleagues about design ideas in the kitchen, we make Slack calls.

How happy are you with the game’s launch on mobile so far?

We’re super stoked with the launch so far. Our friends at Playdigious have done an amazing job on both the porting and the publishing of the game. They came up with a new mobile-orientated control system as well as convincing the game to work on some really low specification telephones.

Overall, we’ve got great reviews and it’s sold well for an expensive premium title on mobile. We’re just excited to get the mobile versions up to date with the PC and console versions.

How are you approaching live ops? What can you tell us about your plans in terms of updates?

Well, one of the things that helped to come from web development was that we were used to working on close collaboration with a community of passionate and invested players. So, when we launched into Early Access on Steam, we felt really at home iterating, testing things, and pushing regular updates.

That hasn’t really changed since. We still treat the game as if it was in Early Access. We push regular updates usually every two to three months, change systems that the community has let us know that they’re not happy about, as well as implement new ideas that we didn’t have time to build leading up to or during the EA period.

Now we’ve started building DLC for the game – and the success of the Bad Seed means that there will probably be more to come – all the while adding in new free content and building systemic updates. I’d say that we’ve got a few years left in the game as far as updates go, given how it’s selling. Nevertheless, we’re always adjusting our plans based on community feedback, so we’ll see what the players think.

Can you provide any download or financial data? Any DAUs or other stats?

Right now, across all platforms, we’re talking about 3.2 plus million copies sold.

What can you tell us about your future mobile projects?

If there;s a way that we can bring our games to mobile we will, though for now, we’re focusing on PC/Switch first development with mobile ports down the track. We still have a lot of fans of our older web games that have asked us about adapting them to mobile, so who knows for the distant future?

Opinion: Seven problems Microsoft will have to overcome to make Windows Phone 7 a...