The games industry plays host to a colourful cast of diverse individuals, from artists and coders to narrative designers and studio heads.

The skills to pull off these roles, however, are complex and differing, with each position requiring mastery in its field – especially in these complex times we are all living through at the minute.

To highlight some of the brilliant work that goes on behind the scenes as well as how employees around the world are adapting to the life of remote work, PocketGamer.biz is reaching out to the individuals who make up the games industry in our Jobs in Games: Remote Working series.

This week we spoke with Gismart level designer Aleksandra Turabova.

PocketGamer.biz: How did you first get into games and how did you progress in this role?

Aleksandra Turabova: As far as I can remember, I’ve always liked games. At first it was Tetris and Snake, before my family bought a computer for home, where subsequently video games became my favourite pastime after school. I studied well, but my grandmother was worried about my future. Every day I would play for at least four hours and the biggest punishment for me was always a ban on games.

It’s important to love games, play them, and strive to make your own projects.

When I first learned about the profession of a level designer, I was looking for a summer job before starting university. I was planning to study information technology and economic informatics, going to a lot of interviews, but not one single job seemed right for me. I then discovered a game designer vacancy.

A game designer is a specialist who is responsible for developing the script and content of the game. You can draw a parallel with a film director, who decides where the film will be shot and who will star in it. This seemed like the perfect career for me and so I decided to follow my dream.

Can you tell us about your current role and what it entails?

I’m 23 years old and work for one of the leading companies in entertainment apps and games, Gismart. Besides developing its own games, Gismart is also a game publisher, so we have a few dozen games in development simultaneously. Every month we have a new project, which keeps the environment and pace exciting.

I am especially proud of our Cool Goal project. This hypercasual game became number one in the game charts in 62 countries, which really helped to motivate me. My colleagues help me to progress with their teachings, while I attend further game design courses.

What did you study (if anything) to get your role? What courses would you advise for aspiring professionals in the area?

There are several books that I can recommend, such as Level Up: The Guide to Great Video Game Design by Scott Rogers and The Art of Game Design by Jesse Shell. As for courses, right now the selection is really extensive. But it’s important to choose a course where the teacher is an experienced game designer with reputable and cool case studies they can talk about.

Do you think there are any misconceptions, public or professional, surrounding your area of expertise?

Game development is often a very male-dominated area, yet almost half of the mobile games audience is made up of women. Unfortunately, though there is a lack of female game designers. Before joining Gismart, there were companies I worked for where I was the only female in the game development team. My colleagues treated me differently – some did not take me seriously.

I quickly learned that not all the men in the department had experience in games like me, so I made sure to tell people about the number of played hours I’d spend and that would help in getting people to listen to me. Despite the challenges, you are ultimately appreciated for your professionalism, experience, and love for games.

The industry has changed a lot over the years. I’ve worked in various companies where the atmosphere was friendly and I felt on equal terms from the very beginning. For example, at Gismart 40 per cent of the staff are women.

What advice do you have for someone looking for a job in this profession?

I will not tire of repeating that practice is better than theory. It’s important to love games, play them, and strive to make your own projects.

Before joining Gismart, there were companies I worked for where I was the only female in the game development team.

I have experience working on my own project alongside my uncle, who is a programmer. We teamed up and developed an application with interactive stories where the scenario of the invented story is written together with users. At that time, there were few similar projects and thanks to virality, the application generated 50,000 installations. At one point, a community even formed around the application, which helped promote it.

Based on the idea of the app, teenagers recorded their stories on YouTube and many of today’s popular bloggers were created thanks to such content. Perhaps if my uncle and I had invested more resources into the project, it could’ve made money.

One way or another, working on my own project gave me an enormous amount experience, because within the application I was able to try on different roles: marketer, content editor, and even a monetisation manager.

How has the shift from office to remote working impacted your role, if at all?

From a professional point of view, not much has changed but there are definitely more online meetings. This is a major change yet even the calls were not that new to me. Our offices are located in four countries, including China, and we have always had a cross-team collaboration.

What does your typical day look like when working remotely?

I start my work around 10am and first sync up with the team. During the day, I mostly communicate with the developers. The bonus of working from home is that I can play my music out loud and not listen through headphones. At the end of the working day, I review my progress and then dedicate time to fulfilling my personal hobbies.

What do you think are the biggest advantages and disadvantages of remote working?

The biggest disadvantage is the lack of live communication with colleagues. We have a very friendly, vibrant team, where we joke a lot and this is something that I miss. Whereas, the biggest advantages are the extra time you can spend on your hobbies outside of work, as well as the travel reduction from travelling to the office every day.

Is there anything you wish you had known before moving to remote working?

That you need to cook food. Working from home made me appreciate the ‘free meal’ benefit that is offered at the office, such as breakfast and lunch. 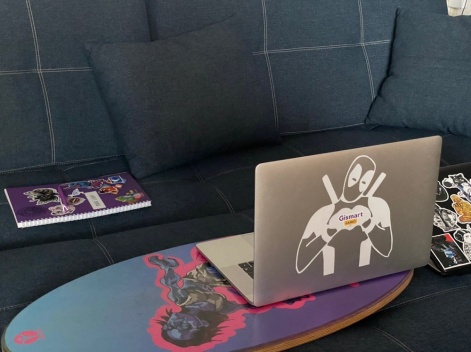 Do you have any advice for others who are struggling to adjust to remote work?

We are living in an unprecedented time. Everything is actively changing, from working conditions to communication. What we are experiencing is unique, so why not use it to your advantage? After the pandemic ends, and if you were given the choice, would you prefer to continue working remotely or go back to working in an office?

I personally would like to return to the office, as I am a very social person and live communication charges me. In addition, there are so many goodies in our office that I would definitely not refuse.

There Aren’t Enough Laptops, and That Could Spell Doom for Many Students