Consumers have spent more than $19 billion on mobile games in Q2 of 2020, according to App Annie.

Furthermore, both the App Store and Google Play generated more revenue in Q2 2020 than in Q1. However, the latter saw the most significant growth at 25 per cent, more than two times the rise seen on the former. Moreover, 85 per cent of earnings through the Android storefront came from games while they accounted for 65 per cent on iOS.

When it comes to downloads, consumers installed over 14 billion games in Q2 2020. Furthermore, on Google Play, there was a 25 per cent increase year-on-year as it accumulated 11 billion installs.

Worldwide, Save the Girl proved to be the most popular game through downloads, leaping up 652 places in the rankings. In second was Playrix’s Gardenscapes – New Acres, which jumped from from 10th in Q1.

However, one impressive performance came from Outfit7’s My Talking Tom Friends, which was only released in June. Reaching No.7 overall, the game hit 60 million installs in just two weeks. 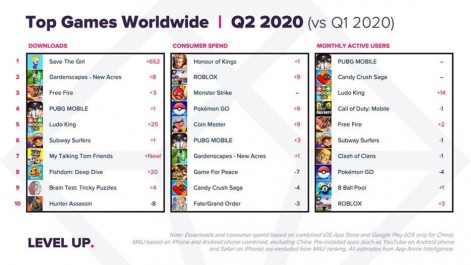 Some of the Best Xbox Games Are Coming to Android Via Project X Cloud,...