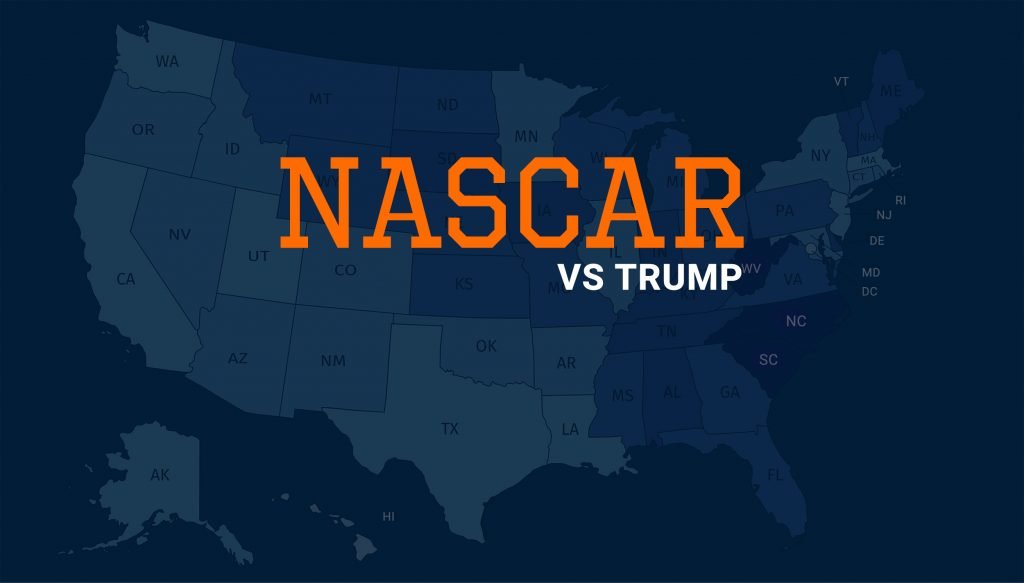 In a sport so closely tied with political affiliation, there is potentially a lot to lose for either Trump, who is fighting for his political career in November, and NASCAR which has been sliding in popularity for years. Either way, there is a lot on the line.

This map depicts a seeming correlation between NASCAR popularity and political affiliation state by state across the US with supporters of right-wing politics making up the largest portion of the NASCAR fan base. Check out the history of NASCAR and Republican affiliation and what it has to do with the current controversies surrounding the sport.

A lot has been in the news lately concerning NASCAR’s stance with BLM and their seeming historical affiliation with right-leaning politics.

The issue has become even more inflamed with tweets from President Trump who has boldly taken a side in the discourse.

Trump had this to say to Bubba Wallace.

Has @BubbaWallace apologized to all of those great NASCAR drivers & officials who came to his aid, stood by his side, & were willing to sacrifice everything for him, only to find out that the whole thing was just another HOAX? That & Flag decision has caused lowest ratings EVER!

Mr. Wallace responded to Trump in his tweet advocating for solidarity and love.

To the next generation and little ones following my foot steps..#LoveWins pic.twitter.com/tVaV3pkdLe

On June 10 NASCAR announced a new stance on the issue of the Confederate flag at their events:

“The presence of the confederate flag at NASCAR events runs contrary to our commitment to providing a welcoming and inclusive environment for all fans, our competitors and our industry. Bringing people together around a love for racing and the community that it creates is what makes our fans and sport special. The display of the confederate flag will be prohibited from all NASCAR events and properties.”

Republicans and NASCAR’s – a Tangled History

Republicans have long had a close affiliation with NASCAR, a marriage openly known as one of the closest relationships between a sporting league and a political party.

A demographics study of the fanbase of NASCAR revealed that NASCAR fans are generally older white males from Republican-leaning states with 40% of NASCAR fans being located in the South and only 20% of all fans belonging to minority groups, well below the national average.

The same study posits that almost 90% of political contributions from NASCAR affiliated groups have historically gone to the Republican Party.

In 2010, the Texas Governor Rick Perry sponsored NASCAR Champion Bobby Labonte’s car and was reportedly paid $255,000 to carry the Governor’s “rickperry.org” logo on his car with his paint scheme coinciding with the politician’s 2010 reelection campaign colors.

In 2008 Joe Gibbs, a NASCAR team owner, spoke at the Republican National Convention.

In 2012 Rick Santorum sponsored a car as well.

Republican politicians are not the only ones to have hitched their horse to the NASCAR wagon. In 1992 Bill Clinton made an appearance at the NASCAR Darlington Raceway while campaigning for president.

Keep up to date with the latest NASCAR event predictions, news, and odds on our NASCAR sports page!

Skillz experiences a successful quarter with $60 million in reveune