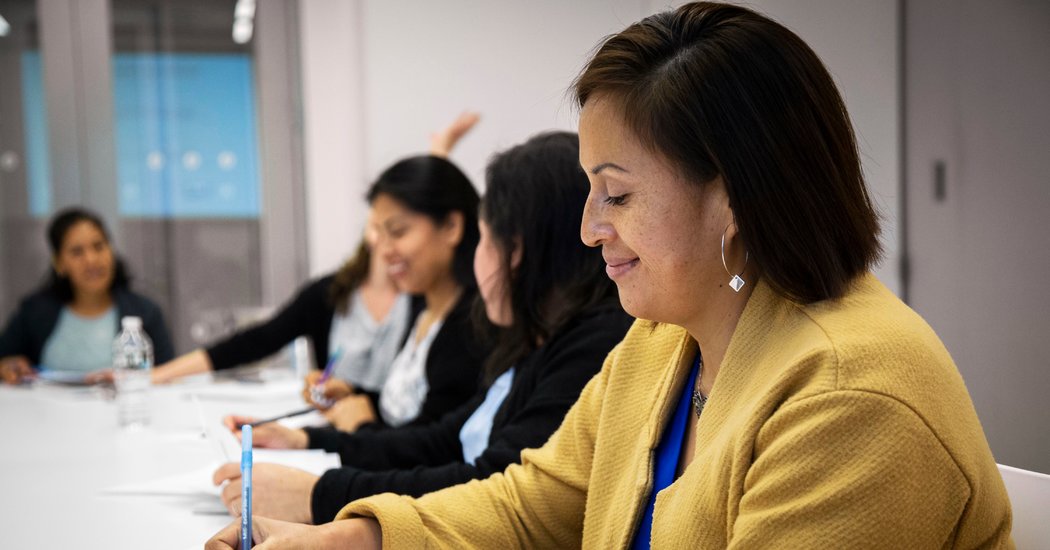 Maria Carmen Tapia has learned a host of new skills in the last few months. The 42-year-old housekeeper and all her colleagues at the housekeeping app Up & Go were trained by Occupational Safety and Health Administration-authorized trainers, learning to put on protective gear correctly and establish safety protocols to keep themselves and their clients safe during the pandemic.

At first glance, Up & Go resembles any other housekeeping app: When a client requests a cleaning service in New York City, a few clicks bring a trained housekeeper like Ms. Tapia to the door with her scrubber, broom and eco-sprays.

But Up & Go is different from most gig economy platforms. Ms. Tapia is not an underpaid worker eking out a meager living in an expensive city, but an owner of her own enterprise. “When someone hires me, they get the boss herself,” she said.

Up & Go is a new platform model for cooperatives. In 2017, the nonprofit Center for Family Life, a neighborhood-based family and social services organization in Sunset Park, Brooklyn, invited Ms. Tapia to join. Now she is one of 51 housekeepers, all Latin American immigrants, who own the platform. “We want to bring fair work to the workers by bringing the co-ops into the 21st century,” said Sylvia Morse, the project’s coordinator.

The owner-workers share offices, customer service representatives and the app. They talk every two weeks to answer questions like: Should we include more housekeepers and expand the cooperative? During New York City’s stay-at-home order, they had to suspend residential cleanings, which is the core of their business model. But Ms. Tapia and her colleagues made up for some of the losses by fulfilling Up & Go’s contracts for commercial cleanings, and reopened for domestic cleaning on July 1.

The Center for Family Life has worked in Sunset Park since 1978. It offers counseling, child care and senior care — and for the last 12 years it has tried to raise workers’ wages by helping them form cooperatives. Instead of the $11 to $12 an hour Ms. Tapia was earning when she found clients through fliers, she now usually makes $25 an hour with Up & Go.

For a $135 fee she does a five-hour deep cleaning of a one-bedroom apartment: She scrubs the bathroom, polishes the floors. “If a house requires more work, we raise the fee,” Ms. Tapia said. A mother of two, she has worked as a housekeeper and babysitter since she emigrated from Ecuador with her mother 21 years ago. “I was barely making minimum wage,” she said. “My life has changed drastically.”

Cooperatives have been booming in New York. Landscapers, nurses and painters increasingly organize themselves in co-ops. But Up & Go is unique in combining the traditional co-op structure with the online platform and app technology of the gig economy. It tries to pick the best of two worlds: For clients, the ease of an app to book help quickly. For workers, the security of regular jobs plus the pride of being an entrepreneur.

The workers agreed on safety protocols as soon as the threat of Covid-19 became clear. “In this stressful time,” Ms. Morse said, “it makes a big difference that workers have the space to share, establish best practices.” To make up for the loss of income, the center did extra fund-raising, extended the hours of its food pantry and connected those who struggle to pay their bills with emergency funds.

“Early on, the big challenge was to make sure the co-op members had the right information, took precautions to protect themselves and their customers,” Ms. Morse said. “This is where we really saw the power of the co-op. We had these systems in place. Everything was grounded in the worker’s experience, rather than ‘we need to make as much money as possible; let’s send people out even if they don’t have adequate protective gear.’” So far none of Up & Go’s workers has contracted Covid-19.

The gig economy, with platforms like Uber, Handy and TaskRabbit, seemed to offer opportunities for freelancers and unskilled workers when it took off after the 2008 recession. But economists soon warned against pitfalls, and the pandemic has disproportionately affected gig economy workers. As independent contractors, they do not qualify for basic protections like minimum wages. The pandemic has put many of them out of work with no safety net or forced some to consider working without adequate protection.

By contrast, the Up & Go worker-owners distribute the existing jobs fairly among themselves, and every worker has agreed to stay home should they develop any symptoms. “A big difference is that we know our rights better,” said Ms. Tapia. “We are not only workers but entrepreneurs. That changed who I am and how I see myself. I am constantly learning new things — how to run a business, how to handle a democratic decision-making process, what good management is.” She also appreciates that the co-op members decide collectively whether to approve new members and that if she falls ill, “another worker will keep my spot open.”

The 51 Up & Go worker-owners, only two of whom are men, speak very little English. Ms. Tapia knows enough English to arrange basic housekeeping but leaves more complex conversations and conflict resolution to professional customer representatives. “It is exactly this clientele we want to serve with Up & Go,” Ms. Morse emphasized. “Historically, this type of work has been done by immigrants and predominantly by women. Racism and sexism have devalued this work.”

Development costs are the biggest hurdle in copying the Up & Go model. Barclays and Robin Hood, an anti-poverty organization in New York City, funded the start-up with $500,000 and invested again this year. Tech experts from CoLab Cooperative improved the app. This financial and logistical support allows the Up & Go owners to keep 95 percent of their income; 5 percent goes to support the infrastructure.

“Who owns the technology? Who decides how it is designed? How does it influence the quality of life for workers in the gig economy?” Ms. Morse said. “When we look at the change in the working world, these questions are important.”

This model will work long-term only if enough consumers are willing to pay a higher fee to be certain that their housekeepers are legally documented and fairly paid. “I’ve seen $30 online specials for an initial cleaning,” Ms. Morse said. “Up & Go just can’t do that.”

Instead, Up & Go offers quality and trust. “It’s a matter of trust to let someone into your home,” she said. “With Up & Go, you know that the person has not just downloaded an app but is a co-owner who went through a training process. The sense of accountability and safety is huge.”

To be sure, while its website describes the multiple precautions the worker-owners take to avoid spreading or contracting Covid-19, it is also frank with prospective customers that there is always a risk of contagion. So Up & Go, like many service enterprises, requires customers to sign a liability waiver before hiring their cleaners.

Before the pandemic, Ms. Morse said, Up & Go was likely to turn a profit this year and expand. Now she hopes that commercial cleanings will keep the start-up afloat and that other cities and industries will copy the model. She found it especially encouraging that nearly 50 percent of its residential clients continue to pay for the services to support the workers even if they could not receive their services during the lockdown.

Michaela Haas, Ph.D, is a journalist and the author, most recently, of “Bouncing Forward: The Art & Science of Cultivating Resilience.”

To receive email alerts for Fixes columns, sign up here.

The Times is committed to publishing a diversity of letters to the editor. We’d like to hear what you think about this or any of our articles. Here are some tips. And here’s our email: letters@nytimes.com.

This is the Ray Tracing We’ve Been Waiting For