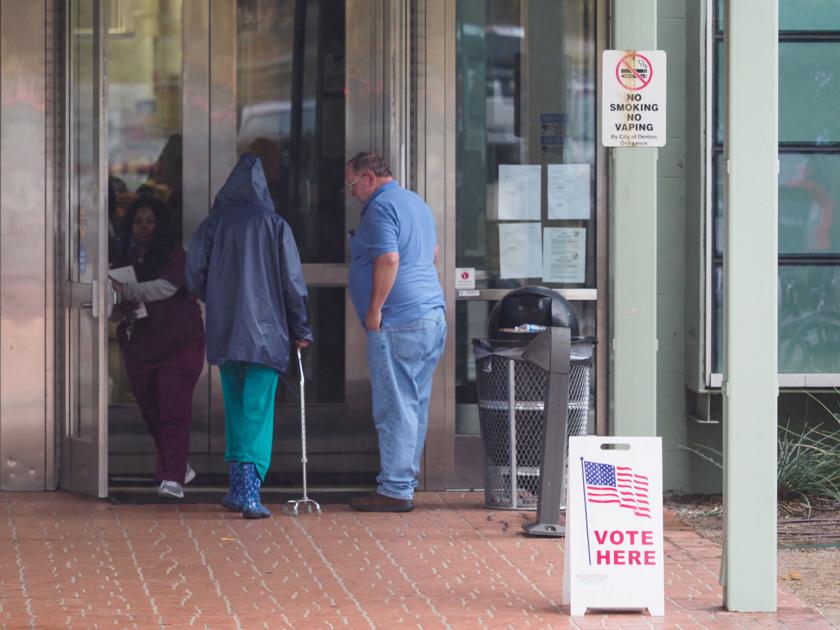 Voters looking for clues how the November 2020 election might go should head to the polls now.

Early voting for the July 14 primary runoffs begins Monday. Denton County voters also have options, depending on whether they voted in the March primary.

The runoff election was originally scheduled for the end of May. Gov. Greg Abbott postponed the election until July as part of his original emergency orders in the COVID-19 pandemic. Later, he added an extra week of early voting to boost social distancing.

Texas primaries are semi-open. Voters who cast a ballot in the GOP primary in March cannot cross over to help decide a Democratic runoff, and vice versa.

But those who never made it to the polls in March — and that was thousands of Denton County voters this year — can pick a party, help decide a nominee, and test the whole voting-in-a-pandemic thing, too.

Democratic Party ballots includes the runoff for the U.S. Senate nomination, where either Royce West or Mary “MJ” Hegar will advance to run against Republican U.S. Senator John Cornyn in November. Chrysta Castañeda and Beto Alonzo are also in a runoff for the Texas Railroad Commission, one of three seats on a board that regulates the oil and gas industry in Texas.

Denton County voters can cast their choice for GOP nominee to the 2nd Court of Appeals and for the 431st District Court in Denton County.

The 431st District Court is one of nine district courts in Denton County that preside over family law matters as well as civil and felony criminal cases. The court was created a decade ago, and Bailey was nominated by former Gov. Rick Perry as its first presiding judge in 2011.

The winner of the GOP nomination will face Democratic nominee Diana Weitzel in November. The base salary for a district judge is set by the Texas Legislature and currently stands at $168,000 per year. District judges serve four-year terms.

For this follow-up, we re-interviewed the candidates this week via Zoom and those interview recordings are included online. The interviews were also transcribed and lightly edited for clarity.

In addition, the March campaign finance statements filed with the Texas Ethics Commission are posted online.

Both candidates have raised and spent thousands on the race, with Jones outspending Johnson by about $30,000 before the pandemic hit.

The candidates must file updated reports covering their most recent fundraising and spending eight days before the July 14 election. Once they do, those reports can be viewed online at www.ethics.state.tx.us.

The virus has created complications in the way we normally campaign. We are making phone calls, making sure our voters are safe and that they understand the various methods by which they may vote. Meetings have just started back up, campaign-wise. I wear a mask to the meetings, trying to be protective of myself and others all along the way, including my family. Things have changed. I have mailers going out and letters to voters. That’s the way we’re making contact right now.

I haven’t changed my viewpoint because I believe, I feel as a judge we should follow the law and judge according to the crime committed. The punishment should fit the crime. I’ve always felt that way. In that respect, I haven’t changed my viewpoint. I also know that there are inequalities in the system. That is something that needs to be looked at and addressed. As a judge, I will look at circumstances — the crime, whether there’s crime committed prior to the act that’s before the court — and deal with that accordingly. I don’t downplay the injustices that there are. But I can say that not everything is an injustice. We have to look at the totality of the circumstances to make the decision.

I’m board certified in family law and child welfare law, and that [certification] is not easy [to obtain] at all. This is something that tests my legal knowledge. I had to prove I have a high level of trial skills, not just non-jury trials, but trials before a jury as well. I’ve represented 600-plus clients in Denton County. I think Denton residents should know that I know how the system works before I take the bench. I’ve done about 25 jury trials in Denton County alone. My experience far surpasses that of my opponent. I’m the only candidate who is board certified in any area of the law.

Also, I represent children who’ve been abused and neglected. You have to have a certain skill set in order to be able to do that. I’m the only candidate who is qualified to represent those children. I have the proven experience, you can verify it: Go to the Denton County courts and pull up my name, and you’ll see there are a wealth of cases that I represented in. My opponent has represented about 22 cases in Denton County courts. I think that speaks volumes.

I’ll protect our rights, according to the Constitution. If elected, I won’t try to legislate from the bench.

And I’ll bring diversity to the bench. That’s something that Denton County truly needs.

Born in: Fort Worth

The campaign’s going well. It’s very busy and never seemed to slow down in the current environment with social media, Facebook especially, but also Twitter, we’ve been able to continue. The Republican clubs have started back up within the last month, so both Derbha and I have been making appearances — almost back to normal. And, no, I do not wear a mask.

I think everything we’ve gone through — the pandemic, the lockdown, the riots — has had a dramatic impact on all of us. It’s caused us to reevaluate everything that happens and consider and pray about how to respond. It hasn’t changed my philosophy or approach to things. I think it does heighten the importance of constitutional protections — the right to peaceful assembly, to communicate grievances, and the importance of courts in upholding the rule of law. But apart from that, I don’t think it has changed my judicial philosophy at all.

Two things: conservative principles and broad-based, complete experience. I have done district court trials in each of the areas that this court handles, family, criminal and business. I’ve done over 150 cases as lead attorney and jury trials in multiple counties. But I think the most important thing in this judicial election is conservative philosophy. I’ll uphold the law and I won’t legislate from the bench. I’ve been endorsed by every conservative organization in this race — 14. I think that combination, proven conservative record and complete experience, makes me the best candidate.

When Behemoths Like Apple Hoard Cultural Touchstones, It’s a Recipe for Disaster

AAPL stock drops nearly 6%, on track for its worst day since March

The Best Soundbars Under $200, According to Our Readers