The doctor is in… or he was at one point, but seems to have checked out for the time being.

Launching on July 9th, 2019, Dr. Mario World became Nintendo‘s fifth game on mobile. The Switch maker was well into its third year of creating games specifically for the platform, yet the pill-popping match-three puzzler could have been forgiven for the company’s first due to its lack of understanding of the market and its core audience.

Following the success of Dragalia Lost – which managed to carve out a nice niche corner for itself – and ahead of the already announced and highly anticipated Mario Kart Tour, Nintendo pulled from one of its earliest games while utilising its most popular figure once more.

Shortly after release, the game topped the iOS charts in the US and, surprisingly, did it at a quicker rate than Niantic’s magical follow up Harry Potter: Wizards Unite.

A healthy start for the plumber turned medical professional, which amounted to five million installs within its first week and 7.5 million downloads in its first month (according to Sensor Tower). 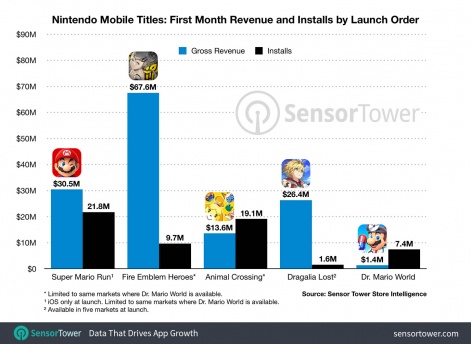 However, while downloads were seemingly respectable, revenue plummeted. The first week saw Dr. Mario World generate $500,000 in revenue, meaning that at the time, all other Nintendo mobile games had fared better.

This continued throughout its first month ($1.4 million) and ended with the puzzler being Nintendo’s lowest release on mobile for revenue to date – surely a bitter pill to swallow.

Eleven months on and as the game closes in on its one-year anniversary, new stats (data provided from Sensor Tower up until June 16th, 2020) have confirmed that Dr. Mario World only managed to capture another 3.6 million installs, to total 11.1 million lifetime downloads.

Next to this, revenue has slumped to $6.9 million, which in comparison to Nintendo’s next highest title for revenue on the platform – Super Mario Run – generated $78 million. Topping the chart is still Fire Emblem Heroes with a whopping $712.6 million, putting into perspective just what Nintendo IP can achieve.

So, what went wrong for Dr. Mario World? Was it the strong monetisation not commonly found attributed to the Nintendo brand? The generic puzzle gameplay that arguably other competitors on mobile nailed years prior? The various bugs encountered by users early on? The introduction of seasons? The uneven multiplayer? Or even the overabundance of Mario characters donning the Doctor uniform, from Dr. Toad to Dr. Baby Luigi to Dr. Fire Peach?

Red: “Introducing a new doctor arriving June 26, 3 AM PT. It’s Dr. Baby Wario! So even THAT doctor was cute at one point, huh? There’s just one doctor this time. Please take it easy on me.” #DrMarioWorld pic.twitter.com/doc5x0AVoX

Anyone that has played the game will tell you something is off, which has factored into Western audiences showing little interest. The biggest contributor to revenue in this part of the world went to the US, but only then was $2.7 million of player spending invested from 4.1 million downloads.

Whatever the case, this has resulted in the game placing dead last for Nintendo on the platform and has now seen the firm reportedly step away from any new mobile releases for the foreseeable future.

DeNA. who worked with Nintendo on four out of six of their releases – Super Mario Run, Fire Emblem Heroes, Animal Crossing: Pocket Camp, and Mario Kart Tour – have confirmed no further collaborations until at least the end of this fiscal year (March 31st, 2021). With that, it looks that more effort will be focused on Mario Kart and Pocket Camp – both proving to have huge potential.

Dr. Mario World, on the other hand, looks set to continue its roll-out of new levels and new characters like Dr. Fire Ice Baby Golden Bowser. But for anyone that has experienced the original, or for anyone a fan of plumber’s antics, it’s hard to not look at this as a blemish on the Nintendo name.

In 2020, Warsaw’s startup ecosystem is ‘a place to observe carefully’