Editor’s note: The global community of Android developers has always been a powerful force in shaping the direction of the Android platform; each and every voice matters to us. We have cancelled the virtual launch event to allow people to focus on important discussions around racial justice in the United States. Instead, we are releasing the Android 11 Beta today in a much different form, via short-form videos and web pages that you can consume at your own pace when the time is right for you. Millions of developers around the world build their business with Android, and we’re releasing the Beta today to continue to support these developers with the latest tools. We humbly thank those who are able to offer their feedback on this release.

Today, we’re unwrapping the Beta release for Android 11 as well as the latest updates for developers from Kotlin coroutines, to progress on the Jetpack Compose toolkit, to faster builds in Android Studio, even a refreshed experience for the Play Console.

You’ve been helping us with feedback on the Android 11 developer previews since February, and today we released the first Beta of Android 11 focused on three key themes: People, Controls, and Privacy.

People: we’re making Android more people-centric and expressive, reimagining the way we have conversations on our phones, and building an OS that can recognize and prioritize the most important people in your life:

Controls: the latest release of Android can now help you can quickly get to all of your smart devices and control them in one space:

Developer friendliness: We want to make it easy for developers to take advantage of the new release, so to make compat testing easier, we’ve:

Android 11 also includes a number of other developer productivity improvements like wireless ADB debugging, ADB incremental for faster installs of large APKs, and more nullability annotations on platform APIs (to catch issues at build time instead of runtime), and more.

The first Beta for Android 11 is available today, with final SDK and NDK APIs and new features to try in your apps. If you have a Pixel 2, 3, 3a, or 4 device, enroll here to get Android 11 Beta updates over-the-air. As always, downloads for Pixel and the Android Emulator are also available. To learn about all of the developer features in Android 11, visit the Android 11 developer site.

Over the past several years, the Android team has been hard at work improving the mobile developer experience, to make you more productive. This includes the Android Studio IDE, a great language (Kotlin!), Jetpack libraries to make common tasks easy, and Android App Bundles to improve app distribution. Today we call this modern Android development – bringing you the best of Android to make you as efficient and productive as possible.

Today, we released new features in Android Studio 4.1 Beta and 4.2 Canary, focused on a number of crucial asks from developers: 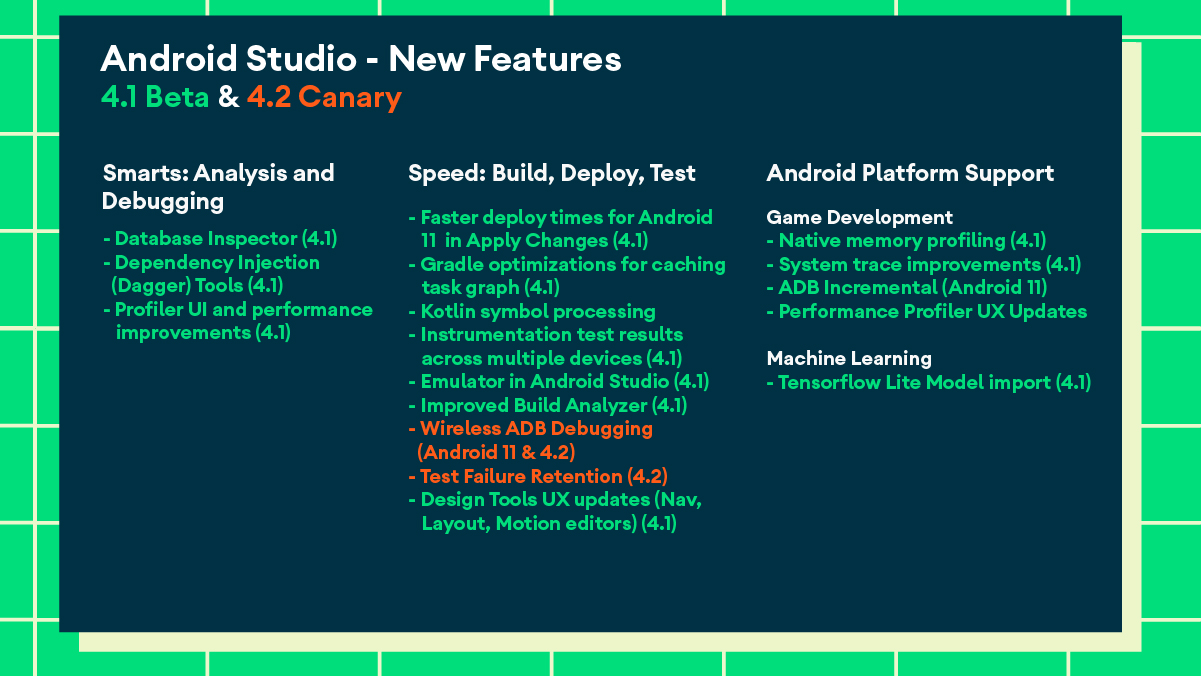 Languages and libraries are a major area of investment in modern Android development, with Kotlin’s modern, concise language and Jetpack’s opinionated powerful libraries all focused around making you more productive.

With the rise in Kotlin adoption (with over 70% of top 1000 apps on Google Play now using Kotlin) and so many developers using Kotlin, we can now use it to simplify your experience in new ways. Kotlin coroutines are a language feature of Kotlin which make concurrent calls much easier to write and understand. We’re making coroutines our official recommendation, and we’ve built coroutines support into 3 of the most-used Jetpack libraries — Lifecycle, WorkManager, and Room — so you can write even better code.

Kotlin itself also continues to get better with every release, thanks to the awesome team at Jetbrains. Kotlin 1.4 provides faster code completion, more powerful type inference enabled by default, function interfaces, as well as helpful quality of life improvements like mixing named and positioning arguments.

We also continue to push Jetpack forward – a suite of libraries which spans multiple Android releases and is designed to make common mobile development patterns fast and easy. Many of us have long loved Dagger, so we worked with the Dagger team to bring you Hilt, a developer-friendly wrapper on top of Dagger, as a recommended Dependency Injection solution for Android. You’ll find this in alpha ready to try out. We’ve also added a second new library App Startup, to help both app developers and library developers improve app startup time by optimizing initialization of libraries. We have many more updates to existing libraries as well, including a major update to Paging 3, rewritten Kotlin-first with full support for coroutines!

The latest on our new UI toolkit, Compose

There’s one more thing you need to be super productive — and that’s a powerful UI toolkit to quickly and easily build beautiful UIs on Android, with native access to the platform APIs. That’s why we’re building Jetpack Compose, our new modern UI toolkit that brings your app to life with less code, powerful tools, and intuitive Kotlin APIs.

Today we are launching Jetpack Compose Developer Preview 2, packed with features developers have been asking us for:

We’ve also added a number of new capabilities to Android Studio 4.2, in close partnership with Jetbrains Kotlin team, to help you build apps with Compose:

Compose isn’t ready for production use yet, in particular as we finish performance optimizations, but we’d love you to give it a try and share feedback. We plan to launch Alpha this summer and 1.0 next year.

Google Play is focused on helping developers grow their business. With that mission in mind, we’ve redesigned the Google Play Console to help you maximize your success on our platform. In addition to being clearer and easier to use, we’ve added features to help you:

Wrapping it all up

But there’s so much more we’re launching that we didn’t get to talk about!

Among Us hit 500 million monthly active users in November