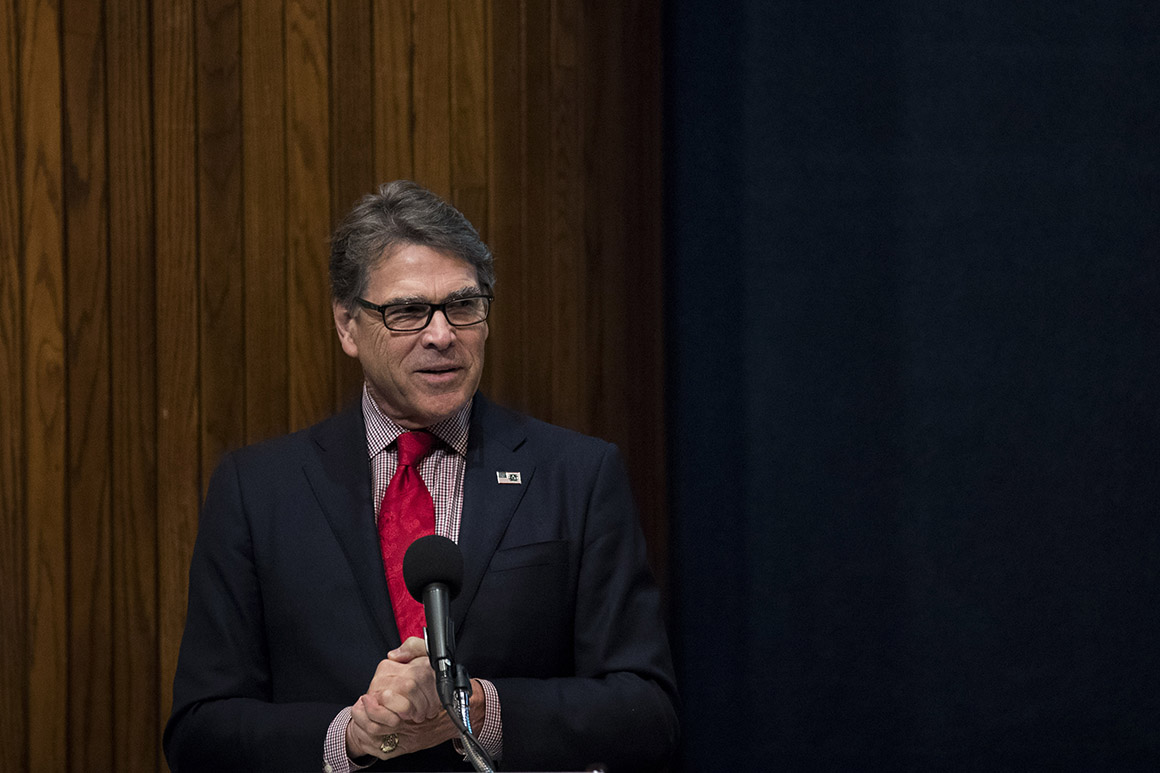 In a Cabinet as volatile as Trump’s, Perry’s biggest success may come down to one achievement: “He hasn’t been fired yet, has he?” asked Illinois Rep. John Shimkus, a senior Republican on the House Energy and Commerce Committee.

Here is a report card on Perry’s handling of some of his biggest priorities as secretary:

The energy industry gave Perry high marks for streamlining the DOE permit process and expediting approvals for U.S. companies to export liquefied natural gas, a fuel the former Texas governor hailed as “freedom gas” as he became the industry’s biggest booster abroad. He relished that role during his several trips to Ukraine and other European countries, where he pitched the fuel as an alternative to the continent’s reliance on Russia.

“I feel like a traveling salesman, which is exactly what I am,” Perry told an American Petroleum Institute event in September. As more U.S. gas plants came on line, the United States became the world’s No. 3 exporter of the fuel, and Perry’s effort helped drive deals like one in which Poland agreed to buy natural gas from the U.S. — though that campaign also embroiled him in the ongoing impeachment investigation.

Charlie Riedl, head of the trade association Center for Liquefied Natural Gas, said promoting the fuel was a core part of Perry’s message. “At every opportunity Perry was talking about U.S. LNG, not just in Ukraine,” Riedl said. “It wasn’t a side conversation. It was part of his main remarks.”

But Perry’s power to clear away permitting hurdles at DOE didn’t extend to the Federal Energy Regulatory Commission, an independent agency that couldn’t approve several gas export projects for months because it lacked a quorum. FERC approved three projects on Nov. 21, just 10 days before Perry’s exit.

Despite Trump’s promises to save the coal industry, it has continued its sharp decline during Perry’s tenure. Nuclear power hasn’t suffered as much, but a handful of reactors have closed in recent years and many others are slated to retire, and a wave of expected new reactors has failed to materialize.

Perry whiffed with his first proposal to have FERC mandate customer-financed supports for struggling coal and nuclear power plants, which he justified on national security grounds as propping up plants that store their fuel on site. Critics attacked the plan as an assault on free-market principles, and FERC unanimously rejected it in early 2018 — even with a commission mostly made up of Trump-appointed Republicans.

“It was not a serious document,” Harvard Electricity Law Initiative Director Ari Peskoe said of the proposal. He added that just by filing the plan, “DOE required the entire industry to waste tens of millions of dollars responding to a proposal that was [dead on arrival].”

Perry tried again, pushing a plan at the White House that would have used DOE’s emergency authority to keep the plants open. But the president’s advisers on the National Security Council and National Economic Council scuttled the proposal over concerns it could not stand up to legal scrutiny.

Still, both FERC and the Energy Department have kept alive discussions of how to create financial incentives for “baseload” power from coal and nuclear plants, though no firm plans have yet emerged. DOE has also poured money into research to develop a new generation of small nuclear reactors that it hopes could eventually be far simpler and cheaper to build than the technology in the existing fleet of plants.

Perry pushed to ease federal mandates that prohibited the sale of some types of older, inefficient light bulbs in favor of new LED versions, and he agreed to allow sales of faster but less efficient dishwashers. Republicans and industry groups have long bristled under the Obama administration’s push for energy efficiency, arguing they interfered with consumers’ ability to choose what products to buy.

He also pushed a rule change that would let manufacturers design their own tests to measure their products’ energy use and efficiency, a move that critics say would violate the law and give companies too much control.

But those changes haven’t been completed, and opponents are likely to string them out in court for years, frustrating manufacturers’ groups that called them overdue.

The source for energy and environment news — weekday mornings, in your inbox.

It’s unclear how much long-term damage Perry’s reputation will suffer from his involvement in Ukraine.

Perry has so far declined to provide information to the House impeachment investigation, but he has denied any knowledge of an alleged scheme by Trump’s appointees to pressure Ukrainian President Volodymyr Zelensky to announce an investigation of former Vice President Joe Biden and his son Hunter. One Democratic congressman is separately urging the House Oversight Committee to look into whether Perry helped two Texas oil men win potentially lucrative drilling leases in Ukraine.

“It’s hard not to grade him on a curve” compared with former Environmental Protection Agency Administrator Scott Pruitt, former Interior Secretary Ryan Zinke, former Health and Human Services Secretary Tom Price and others who flamed out of Trump’s Cabinet, said Jessica Tillipman, an assistant dean and ethics professor at George Washington University Law School who has followed Perry’s work. “But when you grade him against secretaries in past administrations, there are causes for concern and issues that are troubling.”

Getting along with Congress: B

Perry was one of Trump’s least divisive members among lawmakers, not a small thing given the all-but-open-warfare waged between other departments and congressional Democrats.

Republicans were generally effusive about Perry’s time at DOE: “He was very positive,” Rep. Fred Upton (R-Mich.) told POLITICO, echoing other Republicans. “He was very open, transparent, wasn’t afraid of coming up to testify. Wasn’t afraid to take a phone call or weigh in. He had a really good rapport I think with members on both sides. Never a harsh word.”

Democrats largely agreed, despite saying they didn’t agree with the policies Perry was tasked with pushing. But Rep. Bobby Rush (D-Ill.), whose subcommittee on the House Energy and Commerce Committee oversees the Energy Department, said he was ultimately disappointed in Perry for “trumpeting Trump.”

“He was a Texas politician, he had a lot of personality,” Rush said. “It’s a shame that he allowed himself to fall victim to this insanity.”

And… Garmin’s Back After Massive Outage. Sort Of.

The Razer Blade Pro 17 Is a Great Gaming Laptop But I’m Struggling to...