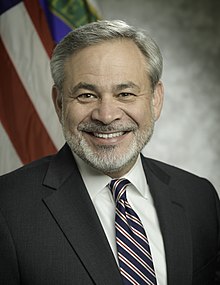 WASHINGTON (Bloomberg) – President Donald Trump said he will nominate Dan Brouillette to be his next energy secretary when Rick Perry leaves the job later this year. “Dan’s experience in the sector is unparalleled. A total professional, I have no doubt that Dan will do a great job!” Trump tweeted Friday.

Brouillette has been serving as No. 2 to Perry, who led the Energy Department with its $36 billion budget and control of the nation’s nuclear arsenal and emergency crude oil stockpile.

The White House arranged for Brouillette to meet with Trump on Friday after Perry gave the president a resignation letter. The deputy has been taking on increasingly high-profile roles for Perry, including sitting in for him at cabinet meetings. The White House session was described by people familiar with the matter who asked not to be named because it was private.

Perry, 69, has been grooming Brouillette, 57, to succeed him for months while planning his own departure. In recent months, Brouillette has more frequently served as the public face of the Energy Department both on missions abroad and at U.S. events.

Trump has elevated deputies at other agencies after the leaders departed. He made David Bernhardt acting secretary of the Interior after Ryan Zinke left the administration, then nominated him for the post. Trump used a similar approach with current Environmental Protection Agency Administrator Andrew Wheeler, who served as the second-ranking official under former chief Scott Pruitt.

A Louisiana native, Brouillette worked at the Energy Department under former President George W. Bush as an assistant secretary for congressional and intergovernmental affairs.

His vision for the Energy Department isn’t expected to veer from the one held by Perry, a vocal advocate of the nation’s oil and gas industry, who attempted — so far unsuccessfully — to subsidize unprofitable coal and nuclear plants in the name of national security and electric grid reliability.

Brouillette has backed those efforts and said during a speech earlier this year that “fuel-secure units are retiring at an alarming rate,” a phenomenon that would “threaten our ability to recover from attacks and natural disasters,” if left unchecked.

The nominee emerged as a key figure during internal administration debates last fall over whether to grant waivers for some countries from sanctions on Iran’s oil. Brouillette argued against the waivers, saying the administration should take a tougher stance against Iran, in a memo to the State Department.

In addition to his past stint at the Energy Department under Bush, Brouillette has worked as staff director for the House Energy and Commerce Committee, where he played a role crafting major energy legislation. He also was a senior executive in the policy office of Ford Motor Co. and financial services provider United Services Automobile Association.

The Final Rick and Morty x Merge Dragons! Event is Happening This Weekend

The Escapists unviverse expands as The Survivalists hits Apple Arcade