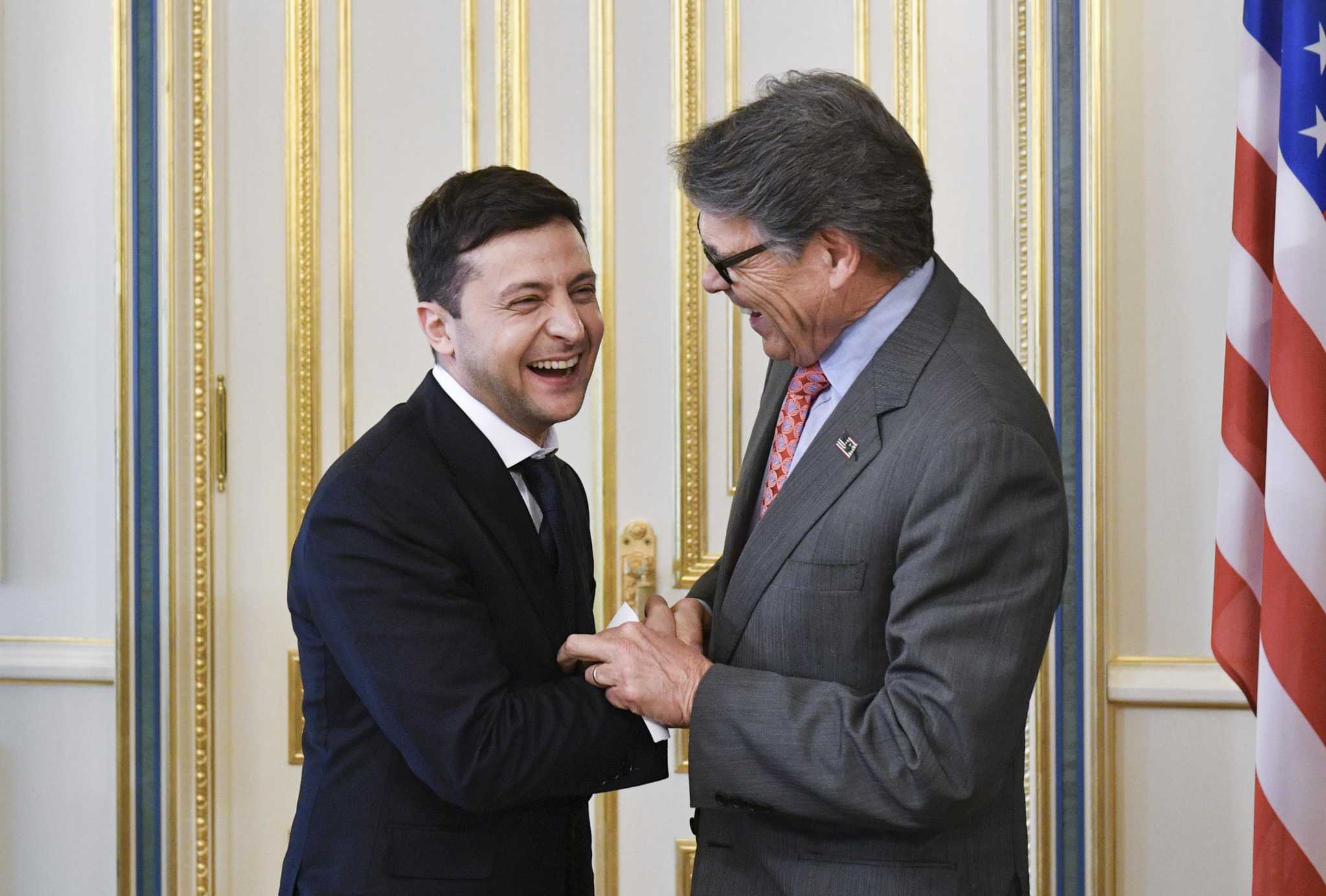 WASHINGTON – Robert Bensh, a Houston energy investor, spent the past two decades developing a small oil and gas business in Ukraine, operating there in relative obscurity.

Then early this year, Bensh got a call asking him to drive to George Bush Intercontinental Airport for a short meeting with Energy Secretary Rick Perry, who was looking for an independent assessment of the former Soviet state’s energy sector.

“We met at the airport, when he was on his way back from Austin or Round Top,” Bensh said, referring to the small Texas town where Perry owns a home. “I told him you have a brand new government that’s open to reform and outside investment. The United States should be at the forefront to help Ukraine improve its energy security.”

Long before the revelation that President Donald Trump asked Ukraine’s newly elected president to investigate whether the Democratic presidential candidate Joe Biden helped kill an investigation into his son’s work for a small, Ukrainian natural gas company, Perry was becoming increasingly engaged in a country viewed by U.S. foreign policy officials as critical to countering Russian influence in Europe.

Perry has denied any effort to pressure the Ukrainians regarding Biden, and so far no evidence to the contrary has surfaced. But through his efforts to reform Ukraine’s state-run energy sector and open new markets for U.S. oil and gas companies, the former Texas governor has stepped into the middle of a fraught geopolitical imbroglio.

Last week, top House Democrats subpoenaed Perry’s records on the Trump administration’s interactions with Ukraine. And attention is only expected to increase after a senior State Department official testified to Congress Tuesday that the White House had assigned Perry, along with Gordon Sondland, ambassador to the European Union, and Kurt Volker, then an envoy to Ukraine, to put pressure on Ukraine, dubbing them the “three amigos,” said Rep. Gerry Connolly, D-Va., according to media reports.

Ukraine’s energy sector has long been criticized by international institutions as a corrupt post-Soviet cabal of oligarchs and patronage jobs, supported by the huge fees they earn for transporting Russian natural gas to western Europe. A report by the International Monetary Fund earlier this year found that executives at the state-run energy company Naftogaz had secretly diverted natural gas from households to industry, cutting into the company’s revenues.

“Ukraine has a long history of energy corruption, going back 25, 30 years,” said Edward Chow, a former top executive in Chevron’s international affairs division and now a fellow at the Center for Strategic and International Studies in Washington. “It has the potential to become gas self-sufficient, yet it’s been dependent on Russian gas up until 2016. And that’s because of the corrupt revenue that comes from Russian gas transit.”

Located between Russia and Poland, with the largest land mass of any European country besides Russia, Ukraine has figured prominently in the foreign policy of American presidents going back to the late 1980s. Tensions rose in 2014 when Russia invaded and seized Ukraine’s Crimea region, prompting the Obama administration to impose sanctions on Moscow – creating a diplomatic logjam that hadn’t much changed when Trump selected Perry to be his energy secretary three years later.

Like cabinet members before him, the former Texas governor urged Ukrainian officials to overhaul the management of its energy sector, end the monopoly of Naftogaz and allow western oil companies to operate there to reduce dependence on Russian natural gas.

Production from the country’s sizable gas reserves is now one-third of what it was in the 1970s, after decades of under investment. Perry, meanwhile, was eager to find new markets for U.S. energy companies, in particular the growing number of liquefied natural gas export terminals along the Gulf Coast.

“When you have Russia playing at its games, it’s going to scare away a lot of majors and the independents,” said one senior official at the Energy Department. “We saw a significant opportunity for [Ukraine] to be western-orientated after essentially being a puppet of Russia.”

Perry won an early victory when he helped broker a deal for Ukraine to buy U.S. coal when its own supplies fell into question following civil unrest in Ukraine’s coal-producing region of Donbas. But getting American LNG to Ukraine has not proven as easy, complicated by Ukraine’s lack of terminals to convert LNG back into a gas for distribution. Russian gas, in addition, is far cheaper, Chow said.

After a meeting with former Ukrainian president Petro Poroshenko in November, Perry returned to Texas eager to get U.S. companies into Ukraine and started putting out inquiries on who in Texas knew the country’s energy sector. Along with Bensh, he spoke with Michael Bleyzer, a Ukrainian-born energy investor in Houston and critic of Russian President Vladimir Putin, who donated $20,000 to Perry’s 2010 gubernatorial campaign.

“The conversation we had was, how do we make Ukraine less dependent on Russian natural gas,” Bleyzer said in an interview. “We were brainstorming. What if we got together a few people who understood the energy space and Ukraine to discuss this?”

After Ukraine’s new president Volodymyr Zelensky won election in December, his administration asked Perry for energy experts who might be able to advise them, according to the Energy Department. Perry would give them the names of both Houston businessmen, along with two well-known energy experts from the consulting firm IHS Markit, Dan Yergin, a Pulitzer-Prize winning energy historian, and Carlos Pascual, a former U.S. ambassador to Ukraine.

That prompted media reports that Perry was attempting to fill Naftogaz’s supervisory board with his cronies from Texas, an allegation Perry has denied.

“Ukraine has long been a strategic energy ally of the United States, and one that has been working with its neighbors to improve regional energy security,” said Energy Department spokeswoman Shaylyn Hynes.

U.S. and European officials have long hoped to better integrate Ukraine into Europe’s gas network, with the hope that gas production there might one day reduce Europe’s dependence on Russia – for which it relies on 40 percent of its supply. The European Union is currently working with Ukrainian officials to break up Naftogaz, with plans to spin off the pipeline subsidiary Ukrtransgaz before the end of this year, an initiative Perry supports, the Energy Department official said.

At the same time, amid regular meetings with Ukrainian officials and a trip to Zelensky’s inauguration at Trump’s behest, Perry has launched an international working group to increase the diversity of gas supplies into Europe at a time when its domestic production is declining. Among the items under discussion is the construction of a pipeline into Ukraine from Poland, which recently built an LNG import terminal and has another in the works.

Earlier this year, Poland’s gas utility signed a deal to import 3.5 million metric tons of LNG a year from Venture Global LNG, which is developing two export terminals in Louisiana, beginning in 2023.

“The U.S. has had an interest for years in weaning Europe from its dependence on Russian natural gas,” said Joe Barnes, a former diplomat with the State Department and now a fellow at Rice University’s Baker Institute for Public Policy. “With substantial U.S. LNG exports, there is the possibility of Ukraine as a potential market. It makes perfectly good sense for them and for us from a geopolitical perspective.”

But doing so will mean breaking the decades-long cycle of corruption in Ukraine, where politicians have long viewed the energy sector as a source of personal wealth. For instance, Burisma Holdings, the small natural gas company where Biden’s son Hunter served as board member until earlier this year, is owned by Ukraine’s former minister of ecology and natural resources Mykola Zlochevsky.

“Burisma claims to be largest private non-state producer of gas in Ukraine, which somehow magically acquired its licenses [for drilling]. It’s an insider, crooked deal,” Chow said. “Everyone’s concerned about corruption in Ukraine, and nobody does anything about it.”

Dancing With the Stars Season 29 Premiere: Who Dazzled on Night 1? And How...

Now $20 off, the Amazon Fire TV Cube Is Here to Indulge Your Appetite...