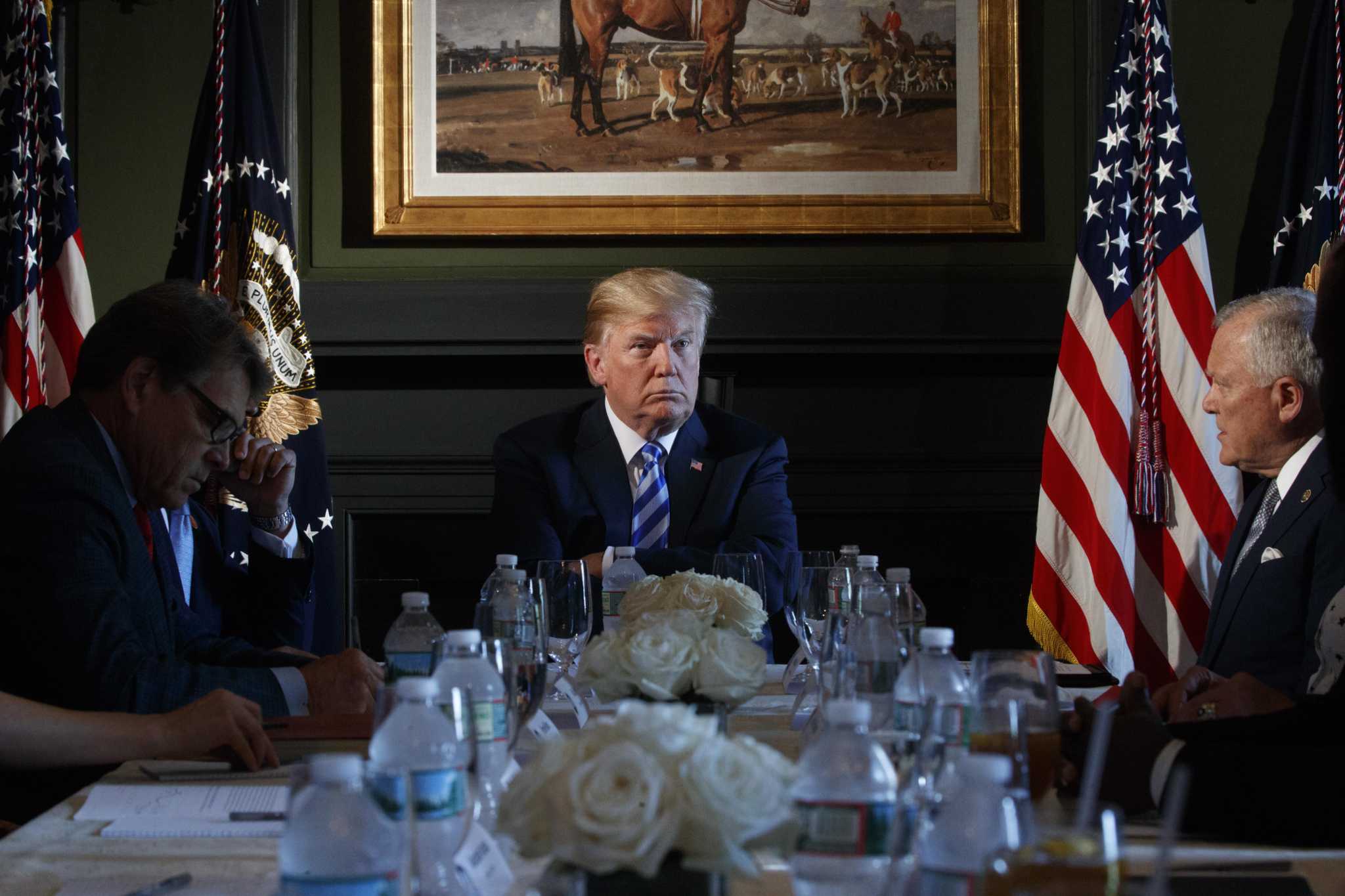 WASHINGTON – For a member of the Trump administration, Rick Perry generates a paltry amount of media coverage.

While other cabinet members are constantly in the spotlight, publicly feuding with the president – Jeff Sessions, Rex Tillerson and Gary Cohn – or spending taxpayer funds lavishly on travel and office decor – Scott Pruitt, Tom Price and Ben Carson – Perry’s worst stumble arguably came when a leaked photo showed him hugging coal baron Robert Murray not long after he proposed a federal bailout for that sector. The story was in and out of the media cycle within days.

Perry, more than 18 months into his tenure as energy secretary, has maintained that rarest of things in Washington these days:tr a low-key, under the radar persona, happy to play the role of likeable sidekick to President Donald Trump. As he promotes Trump’s policies on controversial issues such as reviving the coal and nuclear sectors and trade tariffs, he has managed to do so in a manner that avoids the uproar that regularly engulfs the president and his advisers.

Even Perry’s would-be critics have a hard time finding bad things to say about him.

“I’ve heard compliments [of Perry] from a number of people inside and outside the administration,” said Frank Rose, an assistant secretary of state in the Obama administration and now a senior fellow at the Brookings Institution, a Washington think tank. “I will give credit where credit is due, even though I’m a critic of this administration on many issues.”

Four years after announcing his departure from the Texas governor’s mansion and three years after ending his last presidential campaign, Perry has settled into Washington political life with his brand of cool-headed, pragmatic politics. As Trump upends the capital’s political norms, spinning the heads of media pundits and politicians, Perry maintains a preternatural calm, explaining the president’s actions as a logical, if unusual, extension of his hard-nosed negotiating style and plan to grow the U.S. economy.

Late last month, Perry made the 60-mile trip from Washington to Dominion Energy’s Cove Point LNG terminal on the Chesapeake Bay to celebrate the tankers full of American natural gas heading to Japan and India. Trump’s tough trade stance was making gas executives in Perry’s home state fearful of retaliatory tariffs aimed at their LNG by one the world’s biggest energy consumers, China. But Perry downplayed the tensions and the brewing trade war.

“I think we all recognize some of these trade agreements we’ve had in the past need to be renegotiated,” Perry said. “The president always sets the bar pretty high, and that makes some people nervous.”

Such statements have drawn a mixture of raised eyebrows and outright criticism among some of Perry’s friends back in Texas, where as governor he established a brand as an unrelenting proponent of globalization and free trade. But they also understand that Perry’s in a different role now, expected to support the administration and leave the spotlight to a president who has spent his entire career cultivating it.

“Being low-profile in this cabinet is a good thing. Being high-profile is a high-wire act,” said Matt Mackowiak, a veteran Republican strategist in Austin. “Going on television to criticize the president for something doesn’t help [Perry] do his job.”

Perry declined to be interviewed for this story, citing a busy travel schedule.

One of the most recognizable faces in Texas, Perry served a record 14 years as governor of Texas, capping a career in state politics that began with his election to the state House of Representatives in 1984 – as a Democrat, Perry likes to remind Democrats with a sly grin.

But when he arrived in Washington in early 2017, he was best-known here for two failed presidential runs – the first of which ended disastrously after Perry, reportedly short on sleep and medicated for back pain, said he wanted to eliminate three federal agencies but could only name two.

The one he forgot was the Department of Energy. That drew no end of snark and criticism on cable news when Trump nominated him as energy secretary.

But Perry quickly ended the snickering. At his confirmation hearings, Perry displayed a solid grasp of the issues, if not an expertise. He was charming and gracious, sending the committee chamber into howls of laughter while he and then-Sen. Al Franken, a liberal Democrat from Minnesota and former comedian, traded quips about their meeting on the senator’s couch. (Don’t ask, just watch the clip online.)

For those who knew him from Austin, it was a sign Perry was back to form with his innate sense of how to win over an audience, no matter how hostile, on full display.

“He can read a room and redirect a room like no one I’ve ever seen,” said Brandy Marquez, who served as Perry’s chief of staff while he was governor and now works as a political consultant in Austin. “When you know someone and how hard they work and the thought they put into these things, you want everyone to see him the way you know he is.”

While other cabinet members have inspired rage from advocacy groups, political opponents and sometimes their own employees, Perry has steadily cultivated the reputation of a friendly straight shooter with relationships on both sides of the aisle.

Last summer, he exchanged friendly tweets with Ernest Moniz, an energy secretary under President Obama, after hosting him for Moniz’s portrait unveiling at Energy Department headquarters. As a sign of appreciation for Perry’s hospitality, Moniz hand-delivered a bottle of wine to Perry’s office.

But Perry has never let his loyalty to Trump be questioned, despite their sharp exchanges during the 2016 primary campaign, when Trump mocked Perry’s stylish eyeglasses and Perry called Trump a “cancer on conservatism.”

To the consternation of his allies in the Texas oil and gas industry, Perry has forged ahead on finding ways for Trump to fulfill his pledge to revive the coal industry, first asking the Federal Energy Regulatory Commission to approve higher rates for coal and nuclear power plants and, when that failed, directing his staff to research how to use the president’s national security powers to bail out coal and nuclear plants, according to a memo that leaked this summer.

Those close to Perry say he has traded public notice for private influence, expanding his portfolio as an adviser to Trump. Last week, Perry unexpectedly appeared beside the president at Trump National Golf Club in Bedminister, N.J., for a panel on prison reform.

“There’s no reason for the secretary of energy to be meeting about prison reform,” said Rep. Joe Barton, R-Ennis, a longtime ally of Perry. “The president likes him and trusts him. There’s been quite a bit of turnover in this administration, but one of the seas of tranquility has been the Department of Energy.”

The transition to Washington and its constant media attention has not been without turbulence, however. Perry’s tendency for gaffes is still evident. Last year, for example, he said in a speech that using more fossil fuels in Africa could help prevent sexual assault – the theory being that rape is more difficult if one is living in a home with electric lights.

Aside from that remark, Perry’s greatest skill might simply be avoiding controversy.

Perry sticks to relatively benign topics such as supercomputers – which, with implications for both national security and scientific research, have virtually no opposition. Or else he is acting as passionate booster of the Energy Department’s national laboratories, visits to which get him out of Washington regularly, as do weekend trips to his 10-acre ranch in the Texas town of Round Top, population 90.

All the while, he remains the inveterate politician. When called on to defend the president, he often does so in a manner that leaves unclear which side he’s taking.

Earlier this year, Perry appeared before House and Senate committees to explain the White House plan to slash research funding at the Energy Department. The proposal cut 80 percent from the carbon capture program and 61 percent from renewable energy while entirely eliminating the agency’s cutting-edge research division, Advanced Research Projects Agency-Energy, or ARPA-E.

Republican and Democrats alike were incensed. With the world moving toward cleaner forms of energy, the consensus was the United States should invest more in technology, not less. Perry didn’t protest, instead telling the Senate Appropriations Committee in April that he understood that Congress, rather than the president, has the final say on budgets.

“I respect what you do, and I happen to know what my role is here,” Perry said. “If this committee decides that they’re going to fund ARPA-E at a certain level, I’m going to implement it and run it as efficiently and effectively as we can.”

The performance drew surprised accolades in Democratic circles, and perhaps more astonishingly, no public condemnation from the White House. Robert Cowin, director of government affairs at the Union of Concerned Scientists, an advocacy group, even theorized that Perry had helped talk the administration out of more drastic budget cuts.

Such reactions are a long way from where Perry was two years ago when, with his failed presidential campaigns hanging over him, he left politics  to join the minor celebrity circuit with an appearance on the TV competition “Dancing with the Stars.” Now those events look to be asterisks in a long, successful political career that includes leading the U.S. Energy Department.

“He was a constant winner and constantly successful. He wants to end his career on a high note, not a failed presidential bid,” said Mark Jones, a political science professor at Rice University. “I think Rick Perry is at peace with himself politically.”

Team AA: Our favorite video games of 2020 on console, PC, and mobile

The Fed Is Going To Buy Stocks – Forbes